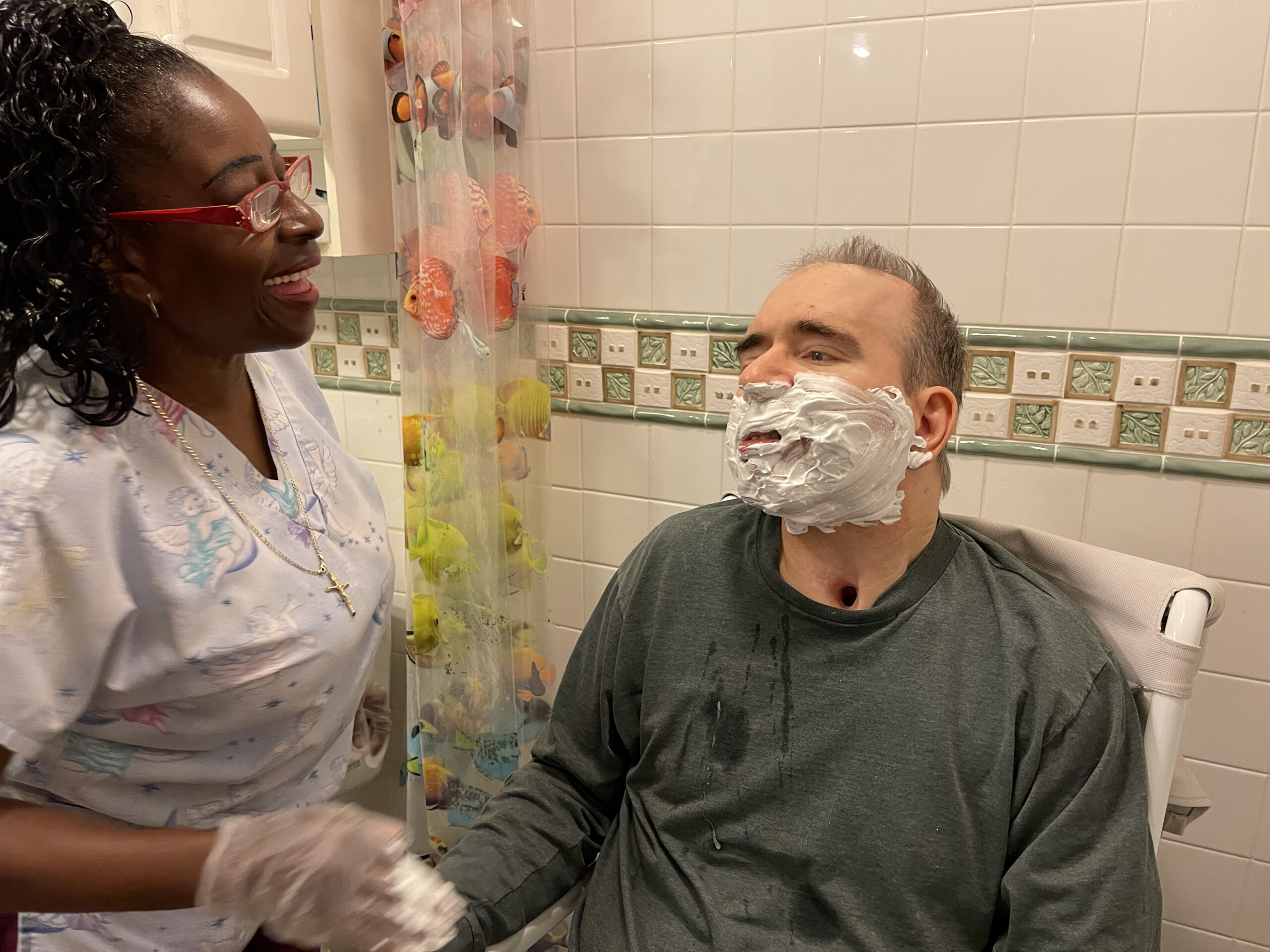 After helping her disabled brother start his morning routine, Nora Clark rides the bus an hour and arrives at Scott Sema’s house at 9 a.m. She brushes his teeth, shaves his face, showers him and then starts making his breakfast. She makes about $1,000 a week working 68 hours for Sema and her brother.

Not surprisingly, there aren’t enough Nora Clarks in the world.

The job is physically grueling with high rates of workplace injury, while low wages keep people on the edge of being able to pay their bills. Nearly half of home care workers in Minnesota receive some form of public assistance.

The shortage has dire consequences for people who can’t find reliable care — and ripple effects in the broader labor force as people increasingly need to quit their jobs to take care of their loved ones.

Clark, 61, started as a personal care aide for a friend some 15 years ago. She had experience working as a housekeeper for a group of mentally disabled men, so the job made sense to her.

“Every time I look up it seems like I’m doing a job where I’m helping people,” Clark said. “You know, you’d be wondering in life what’s your calling? I realized in my 40s maybe this is it because this is what I like doing.”

The pay, though, has never been great. When Clark started, she earned $9.25 an hour. There wasn’t a union for personal care aides back then.

But in 2014, after a bruising political fight at the Capitol, the Service Employees International Union unionized about 27,000 home care workers. It was the largest union election in the state’s history.

In the past seven years, SEIU Healthcare Minnesota has helped push up minimum wages while also securing paid time off, paid holidays and job training. In their latest contract agreement earlier this year, the Legislature agreed to increase the minimum hourly wage to $15.25 an hour.

Because the state Legislature sets the reimbursement rate for home care agencies, the union’s organizing has assisted in increasing wages for the state’s 100,000 home care workers, 80% of whom are women and 37% of whom are people of color.

But even with the latest pay raise, the job’s wages are barely competitive with those at many big box stores and restaurants.

And it’s often hard to string together a reasonable number of hours. Clark has worked as a PCA for her brother for nine years, but he’s only approved for 28 hours a week. It’s not enough to afford rent, groceries and health insurance, which home care workers usually have to purchase on their own.

President Joe Biden has promised to expand in-home care and boost wages for home care workers. He proposed spending $400 billion on home and community-based care earlier this year, which was cut out of the bipartisan infrastructure deal but made it into the second social spending package approved by Senate Democrats.

To make ends meet, Clark’s always worked a second job. For about the past five years, she’s also worked with Sema. The selling point for her was the stable hours — 9 to 5, Monday through Friday.

Sema was accidentally shot in the head when he was two years old. Although he made it through high school and some college, he ultimately had to undergo dozens of brain surgeries that severely limited his abilities. Today, he can’t speak or walk on his own, so he needs help showering, eating, exercising and even keeping clean the stoma he breathes through.

Over the years, he and Clark have built up a rapport and can communicate without talking.

“This morning I came in and he gave me a smile. That was nice. I said, ‘That let’s me know you had a good night. You slept good last night,’” Clark said. “We understand each other very well.”

Clark has worked 68 hours a week, just about every week since she became Sema’s PCA. She doesn’t get time-and-a-half overtime pay, as normally required by federal labor law, because she’s employed by two different agencies. Plus, while the state of Minnesota allows PCAs to work over 40 hours a week, they won’t reimburse care agencies for time-and-a-half — meaning workers virtually never get more than 40 hours on a single job.

Clark says she needs to work until at least 67 to retire and hopes to stay in good health until then.

“I’m just hoping to live to retire,” Clark said. Given her family history, she said, “If we live to see 72, we’re doing good. So, I’m just praying the good Lord find it in his graces to let me live to see retirement and just have maybe a few years after that to enjoy life a little bit.”

It’s hard to find a home care worker like Clark. The state currently has some 9,000 vacancies that care agencies are struggling to fill.

So what happens when you can’t find someone like Clark to sacrifice higher wages to care for your loved ones?

Kerry Adelmann had to leave the workforce to become a PCA for her son, Keegan Iversen, after a motorcycle accident in 2015 left him brain damaged, paralyzed and needing 24-hour care.

“I was making over six figures,” Adelmann said. “And I would do it all over again, for Keegan, but it is still difficult financially.”

As a veteran, Iversen received some care through Veterans Affairs but ultimately he was referred to a nursing home.

At first, Adelmann thought she would keep working and hire a home care worker. But she couldn’t find one.

“These women would come in and they look at Keegan and go, ‘I can’t handle him. He’s too big,’” Adelmann said. “He’s my son, so I mean, I was gonna do it if I had to eat a box of Wheaties every day. But it’s really hard when you have people who are not family.”

She tried out one man, thinking he would be strong enough. But Adelmann said he quickly started asking about Iversen’s pain medication and fell asleep during a conversation on the second day.

“After that, I just said, ‘You know what, forget it. I don’t want people around him that are not family,’” Adelmann said.

So the family decided to take care of Iversen together. Adelmann and her husband sold their small home in St. Louis Park and took out a big mortgage to buy a larger home on a five-acre lot about 40 minutes south of the Twin Cities.

Iversen’s wife and their three young children moved in along with his sister, who also works as his PCA. Soon they were joined by Adelmann’s mom, who has Alzheimer’s and also needs home care.

“If you think bringing home a newborn is scary, try bringing home someone who’s very life depends on you and who can’t call for help. Keegan is nonverbal.”

While she had to sacrifice her career and her retirement, Adelmann is grateful that she and her husband had good jobs so they could keep Iversen out of a nursing home and his kids and wife can continue living with him.

But she’s worried about the time when she won’t be able to care for him.

“I’m not sure if I even want to hope that the kids can do it,” Adelmann said. “I believe in the family taking care of him, but at the same time, I’m essentially asking one of them to give up their financial future? Will they be able to have families of their own?” 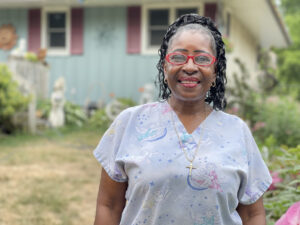 Nora Clark has been a home care worker since 2006 and is a member of SEIU Healthcare Minnesota. 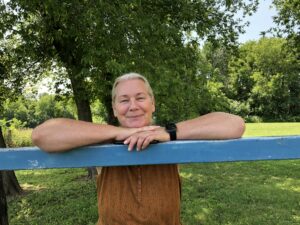 Kerry Adelmann has been an home care worker for her son since 2016 and is a member of SEIU Healthcare Minnesota.