The jury has spoken, and found Derek Chauvin guilty in the death of George Floyd.

The former Minneapolis police officer knelt on Floyd’s neck for more than 9 minutes while he was handcuffed and face down on the pavement at 38th Street and Chicago Avenue last May.

After Hennepin County Judge Peter Cahill read the jury’s verdict on Tuesday, Chauvin was taken into custody and will be sentenced in eight weeks.

The incident on May 25, 2020, was filmed by a teenager and set off protests across the country and reignited a national reckoning on racism in America after decades in which police killed Black men and were rarely punished.

After the verdict was read, Floyd’s relatives held a news conference with their attorney Ben Crump, who won an unprecedented $27 million settlement in the civil lawsuit against the city of Minneapolis.

Philonise Floyd said he’s going to keep fighting for change, not just for George Floyd but for “everybody around this world.”

Minnesotans reacted with relief and satisfaction that justice was done.

Outside the courthouse, demonstrators cheered and chanted “One down, three to go,” in reference to the three other officers  charged with aiding and abetting murder and manslaughter in Floyd’s death.

“We may begin the process of healing that our community has long needed,” said Michael Jones, sitting in his wheelchair amid a crowd outside the Hennepin County Government Center moments after the verdict was announced. “This is an emotional time. I have not seen a cop held accountable like this before.”

Minnesotans also gathered at George Floyd Square, the area in south Minneapolis near where Floyd was killed. The square has become a place of collective grief and celebration since his death.

“I’m overjoyed. I feel like we can finally start doing the work that we need to do,” said the Rev. Lawrence Richardson of Linden Hills United Church of Christ. “My hope is that we can be an example for communities around the nation and around the world of what racial reconciliation can look like.” 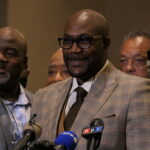 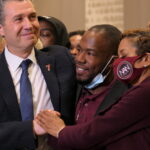 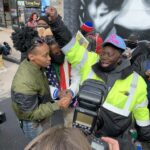 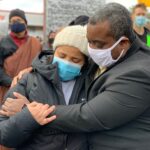 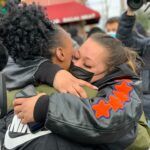 Kia Bible, who has helped run the medical unit providing services at George Floyd Square, said it was a relief that Chauvin was found guilty. The verdict means “that we can actually make a change, that people listen.” Photo by Ricardo Lopez/Minnesota Reformer. 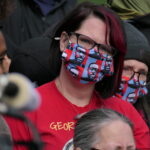 The girlfriend of George Floyd, Courteney Ross, following the conviction of Derek Chauvin of murder and manslaughter on April 20, 2021. Photo by Max Nesterak/Minnesota Reformer. 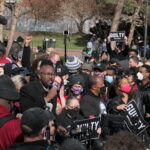 Jaylani Hussein, executive director of CAIR-MN, joined other community leaders and activists the Hennepin County Government Center after the guilty verdict was announced in the murder trial of Derek Chauvin. Photo by Max Nesterak/Minnesota Reformer. 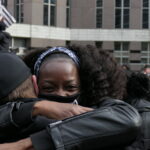 Selena McKnight embraced her friend outside the Hennepin County Government Center after the guilty verdict was announced in the murder trial of Derek Chauvin. “It was the right verdict,” she said. Photo by Max Nesterak/Minnesota Reformer.

Elected officials called on Minnesotans to keep working for police reform. During a news conference Tuesday evening, Gov. Tim Walz said the verdict was an important step in accountability but not true justice — justice will only come from systemic change, he said.

The state’s racial inequities are unsustainable and must be addressed, Walz said. He pledged that his administration would prioritize policing and criminal justice reforms, and policies to improve education, health outcomes and economic opportunities for all Minnesotans.

“I will burn my political capital on this,” Walz said. “If there are those legislators who choose not to make these changes, I will use the platform that I have to make sure Minnesotans know who’s holding up progress.”

Attorney General Keith Ellison, whose office prosecuted Chauvin, thanked Floyd’s family and the community for their patience, and thanked the witnesses who testified after watching Chauvin press his knee into Floyd’s neck. They performed “simple yet profound acts of courage” in telling the truth, Ellison said.

“Why did they stop? They didn’t know George Floyd,” he said. “They stopped and raised their voices, and they even challenged authority because they saw (Floyd’s) humanity.”

Ellison said a verdict can’t end the pain Floyd’s family is experiencing, but he hopes it helps them heal. He called on community members to push for criminal justice reform, saying “it’s in your hands now.”

“The work of our generation is to put unaccountable law enforcement behind us,” Ellison said. “One conviction like this one can create a powerful new opening to shed old practices and reset relationships.”

President Joe Biden addressed the nation Tuesday night, calling systemic racism a “stain on our nation’s soul” and urging lawmakers to take action. He spoke with Walz and Floyd’s relatives earlier in the day.

‘This is for you, George Floyd’

The verdict came after prosecutors laid out a case over the course of 15 days that Floyd died due to a lack of oxygen, or asphyxiation, after Chauvin, a 19-year veteran on the Minneapolis police force, knelt on Floyd, 46.

In the video taken by then-17-year-old Darnella Frazier, Floyd’s face is pinned to the pavement, with Chauvin casually atop him, grinding his knee into Floyd’s neck until he went unconscious after 4 minutes and 45 seconds, had no pulse after 5 minutes and died on the street, according to a breathing expert who testified in court.

Frazier testified during the trial that she’s stayed up nights “apologizing to George Floyd for not doing more and not physically interacting — not saving his life.”

Chauvin’s attorney Eric Nelson argued Floyd died from a toxic mix of fentanyl and methamphetamine and health problems ranging from heart disease to hypertension, noting the county medical examiner found no evidence of injury to Floyd’s neck or back.

After closing arguments, Nelson moved for a mistrial, saying the overwhelming media coverage of the case — including comments from elected officials — was impossible to ignore. (Jurors were not sequestered until they began deliberating Monday afternoon).

The three other officers who were on the scene — Thomas Lane, who held down Floyd’s legs; J. Alexander Kueng, who knelt on Floyd’s back and Tou Thao, who kept onlookers at bay — are scheduled to go on trial in August for aiding and abetting Chauvin.

The case will be studied for decades given its historical importance and legal idiosyncrasies.

Prosecutor Steve Schleicher said he got a call from Ellison, who asked him to help with the case. When a call like that comes, he said, “don’t overthink it,” just do it.

Prosecutor Jerry Blackwell said that “No verdict can bring George Perry Floyd back,” but the verdict shows “He was somebody … and that’s important.” Blackwell said he hopes it brings us along the road “to a better humanity.”

Assistant Attorney General Matthew Frank says it was a privilege to get to know the Floyd family.

“This is for you, George Floyd,” he said, choking up and walking away from the microphone.

Ricardo Lopez was a senior political reporter for the Reformer.