The attention comes at a time of increasing tension among neighbors, with some demanding the area around where Floyd died last May revert to city control from a quasi-autonomous zone, patrolled by activists working with the Bloods gang. An uptick in shootings and other crime has left them living in constant fear.

Mattea Atkinson moved to the neighborhood in 2016, and she and her husband Travis have never been closer to their neighbors, she said. The neighborhood has hosted multiple community-building events like barbecues and a wintertime effort to string thousands of lights in their alley.

But they’ve heard the gunshots at night, and sometimes, during the day. Last summer, while walking home from a park with their 2-year-old daughter Coretta, shots rang out as one group of people shot at another. The Atkinsons quickly took shelter in a garage.

“We could hear the bullets dinging off things nearby,” she said. “That was scary, especially having Coretta with us. You couldn’t tell where anything was coming from so it was pretty alarming for us.”

Afterward, neighbors emerged from their homes to check in on each other.

Abby Finis lives a couple of blocks from where Floyd died, and has lived in the area for a decade. She thinks the city is using an uptick in crime as an excuse to reopen the zone.

“Certainly, there is violence that occurs from time to time, but that’s not new,” she said. “Opening the square isn’t gonna change that.”

Her partner, Julia Eagles recently helped organize a French toast breakfast for the neighborhood, using syrup made from sap tapped from neighborhood maple trees. Despite drizzling rain, dozens of people showed up.

They’re frustrated with the perception that it’s a dangerous place.

“I don’t want to underplay any violence, but we can’t keep coming with the approach of more violence,” Finis said. “That’s not working. That hasn’t been working for decades. We need a different approach to provide people with resources to choose different paths.” 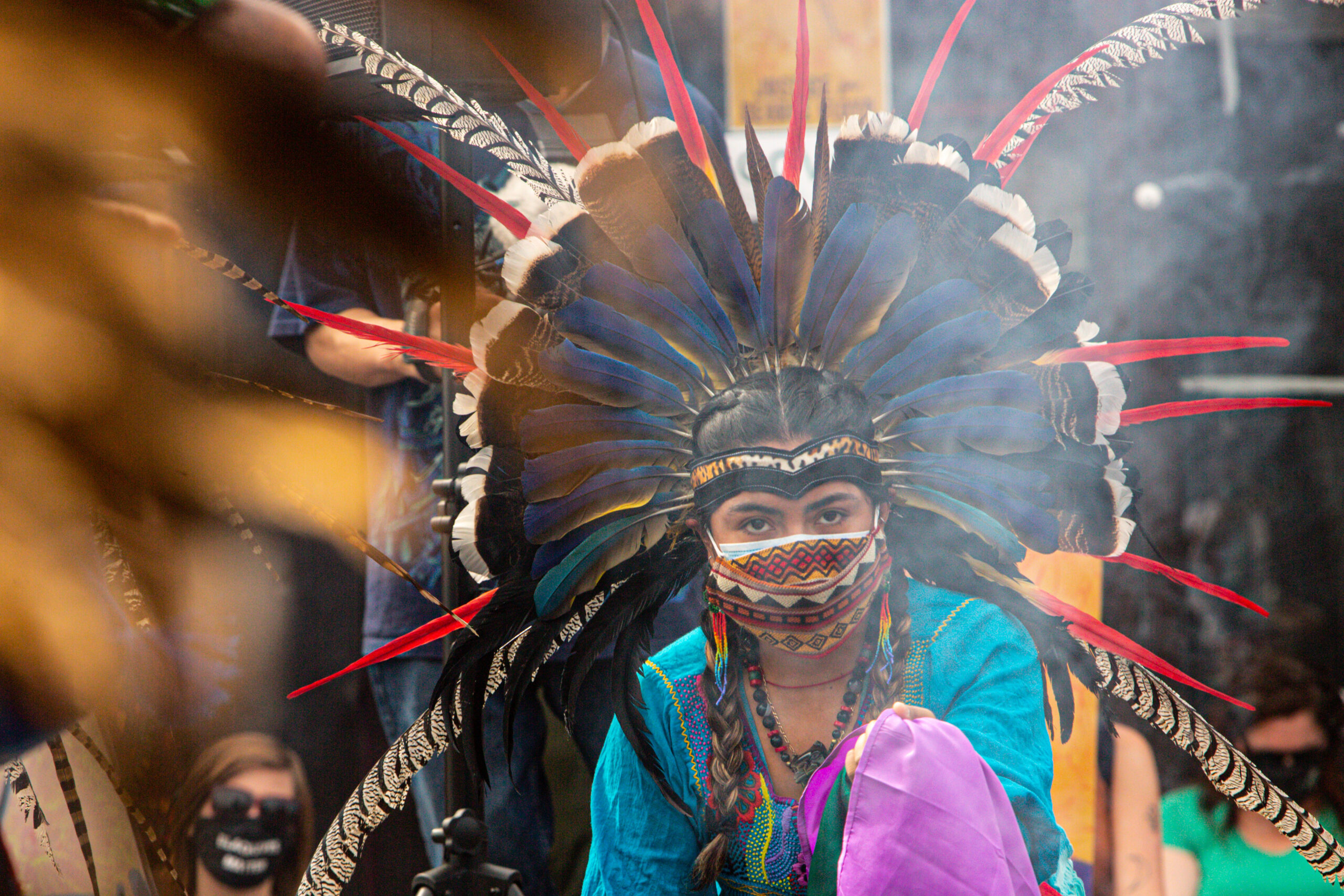 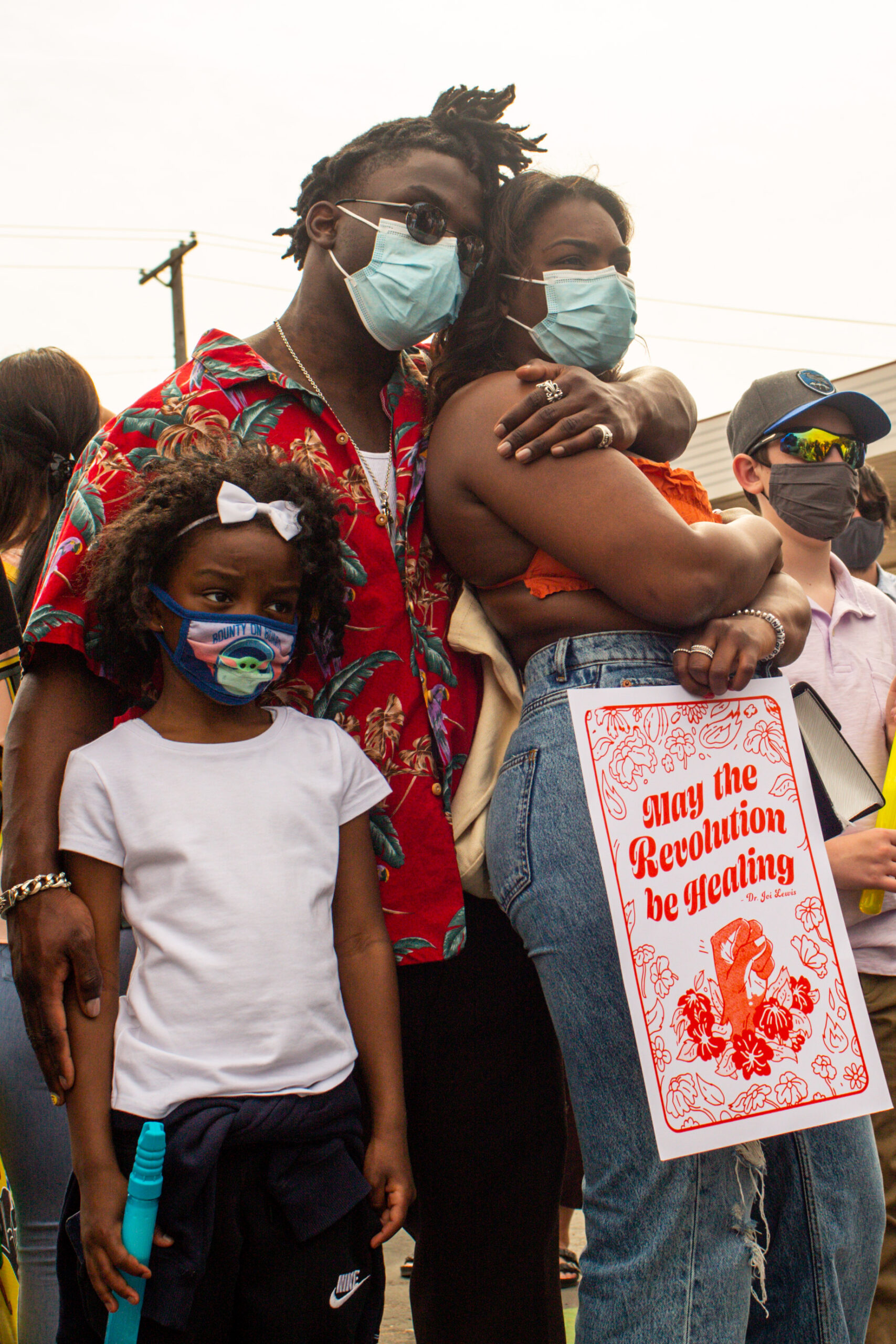 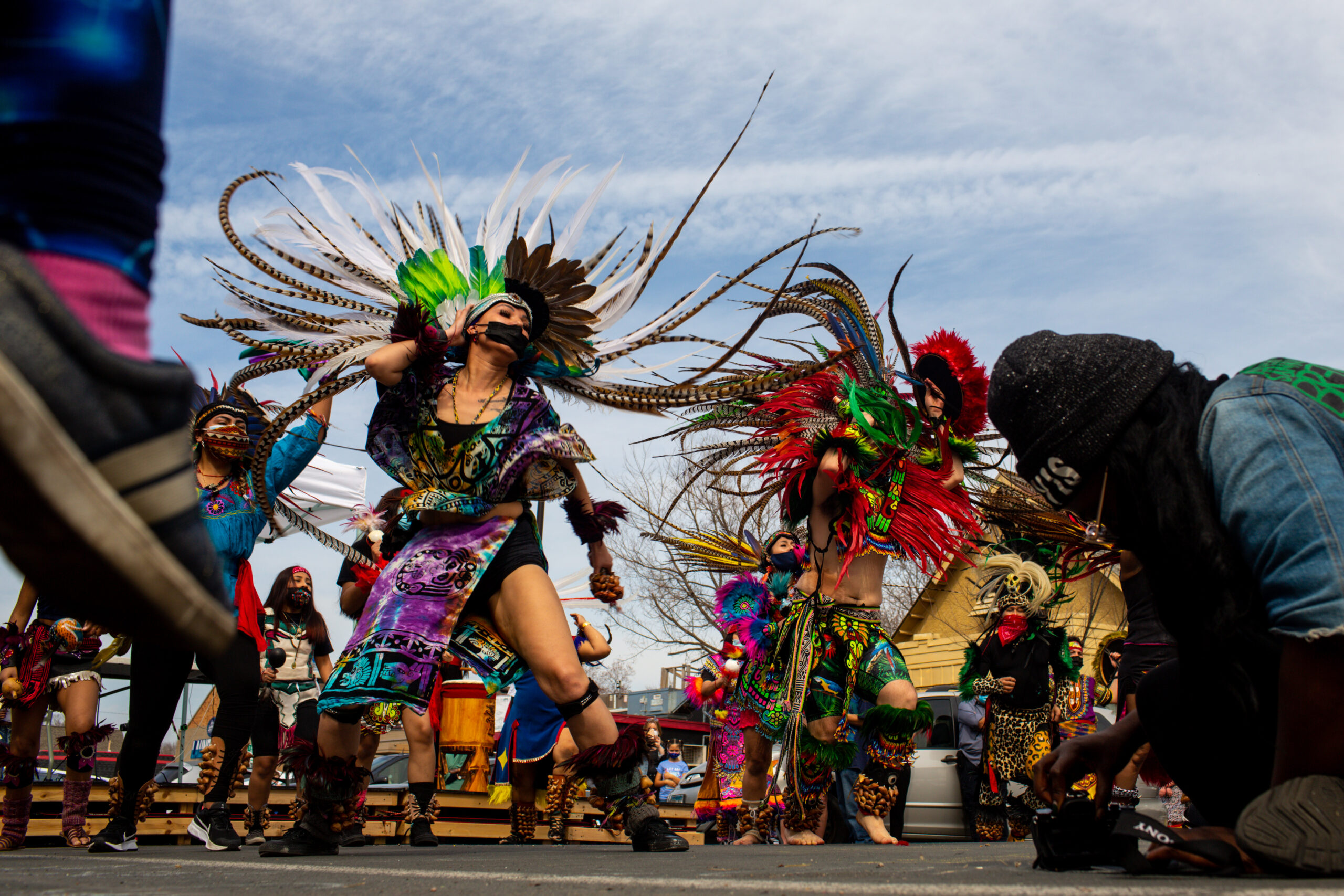 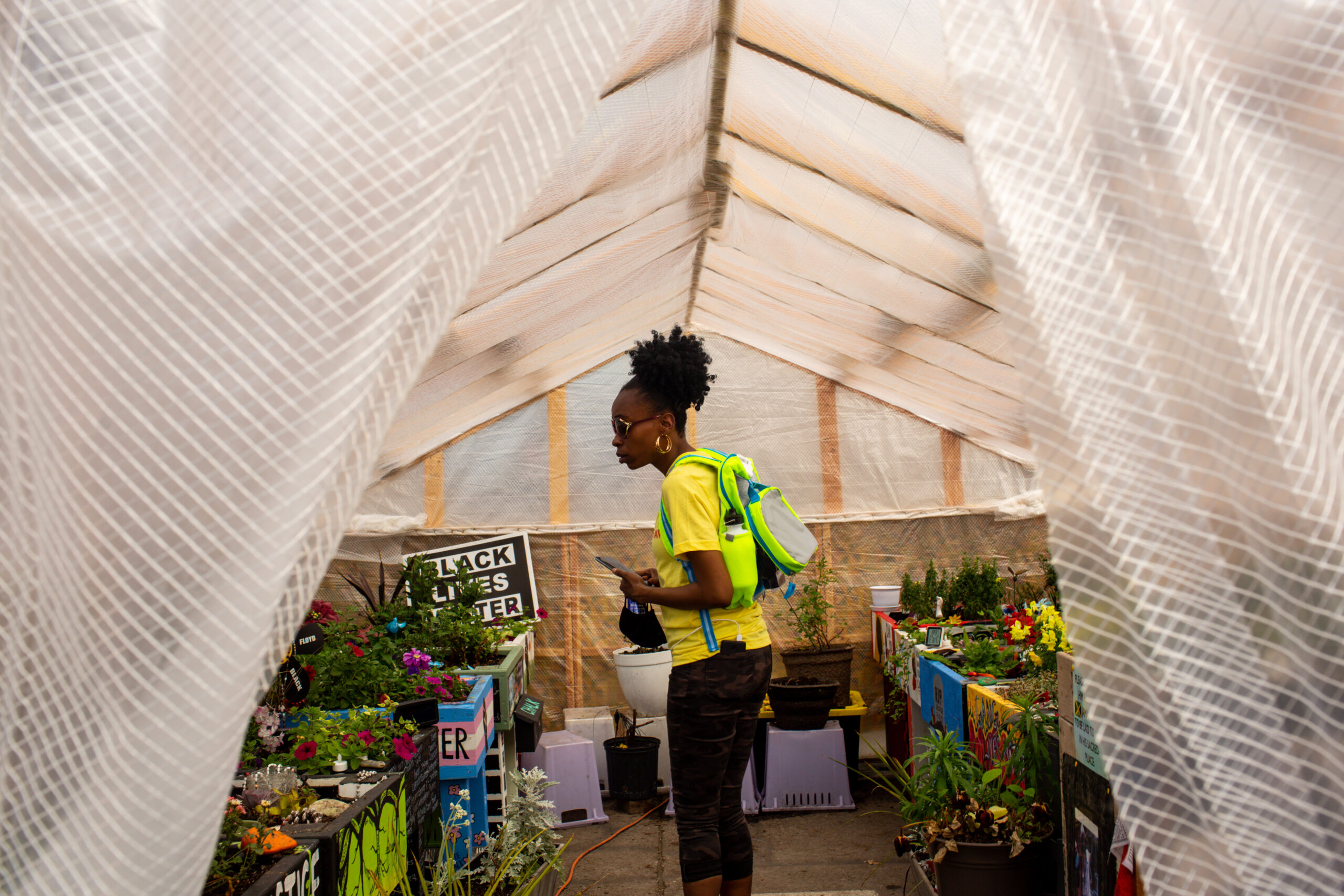 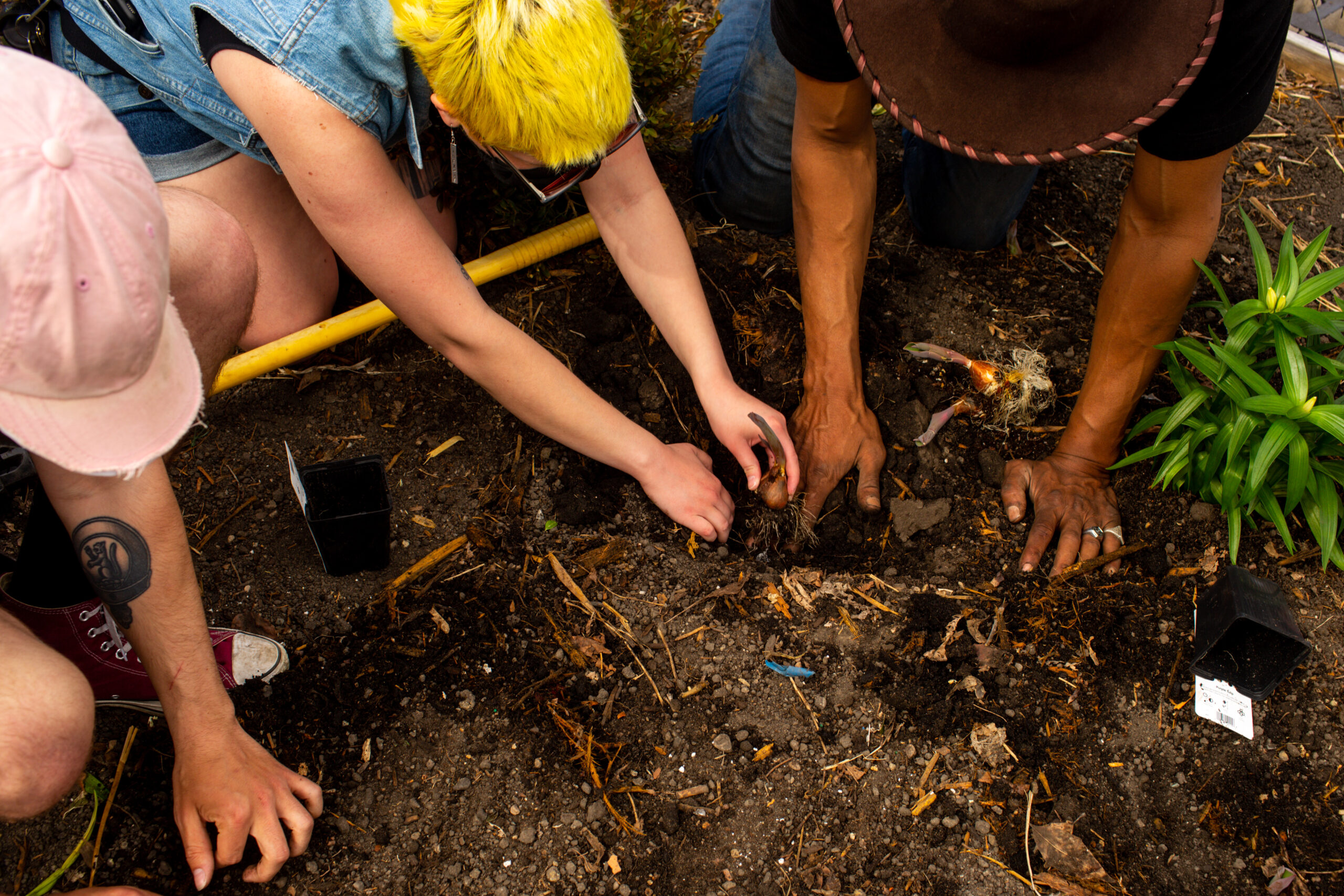 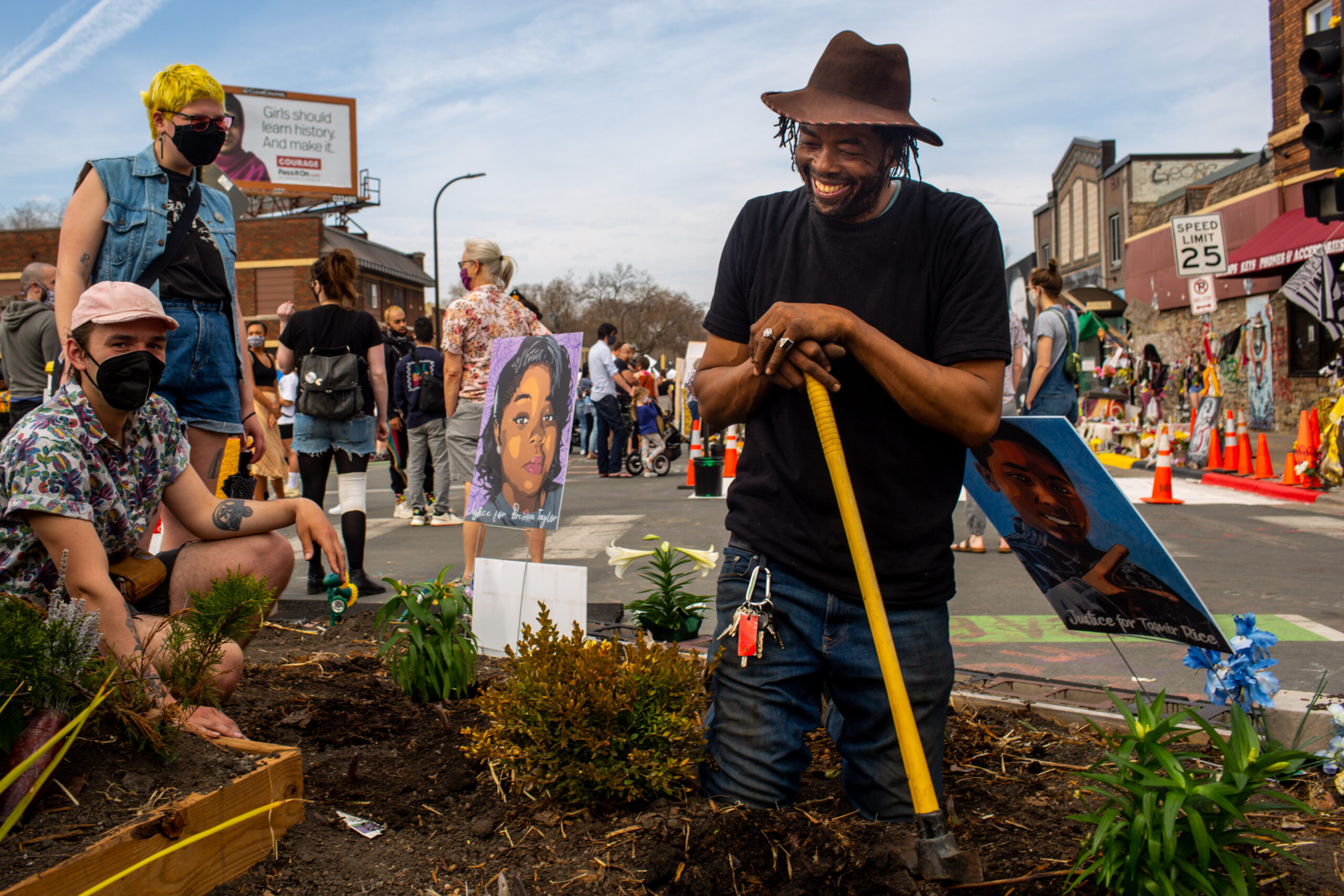 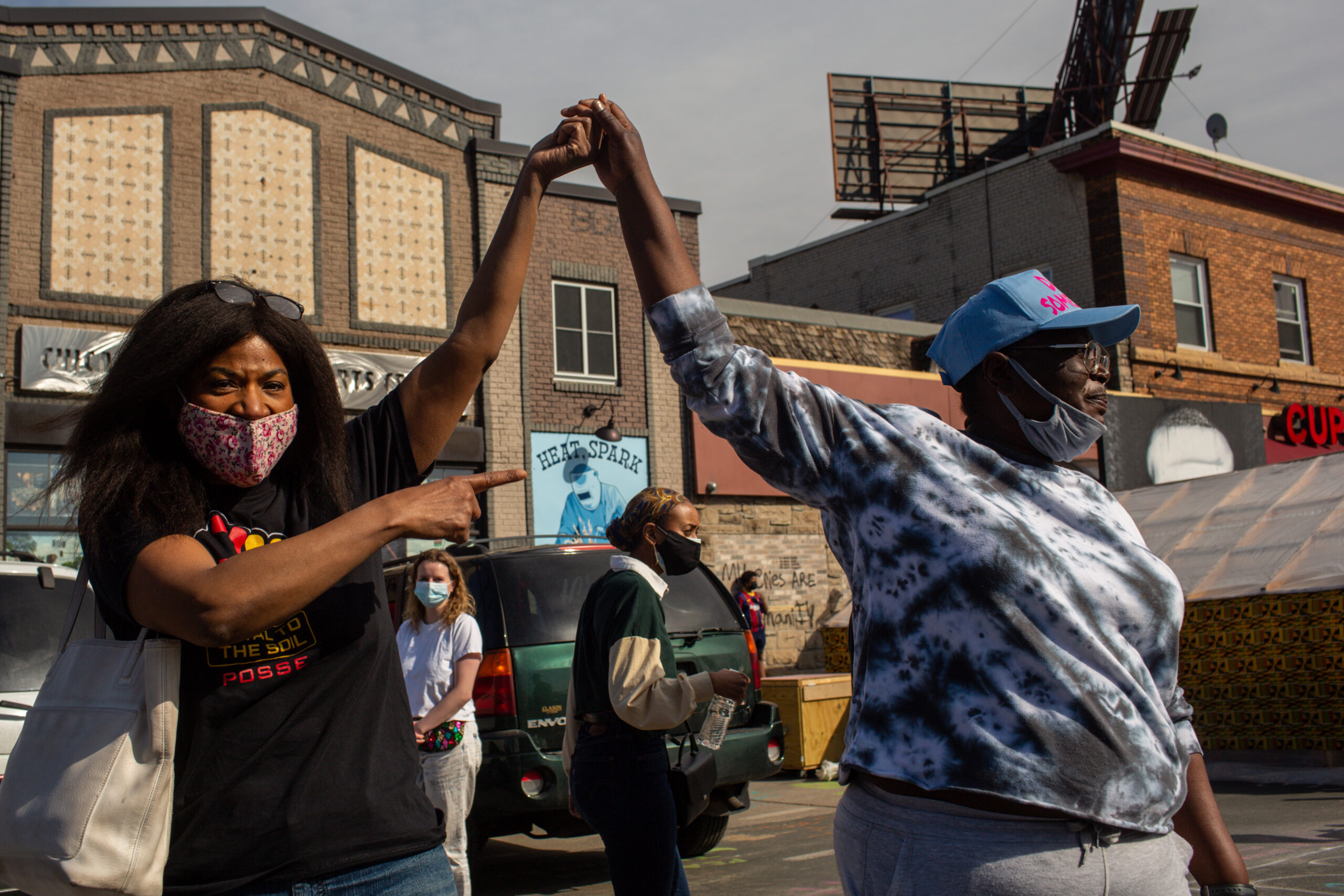 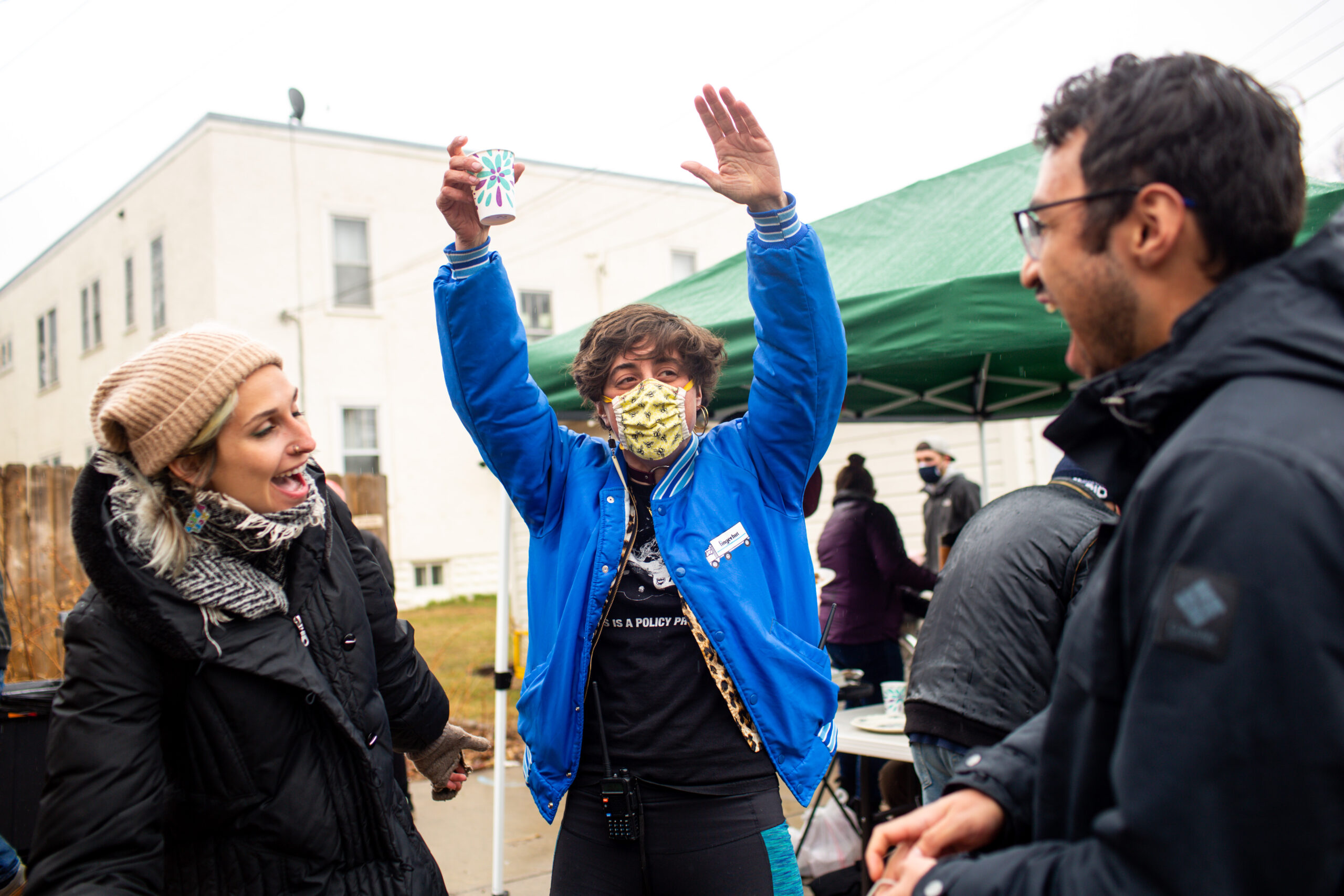 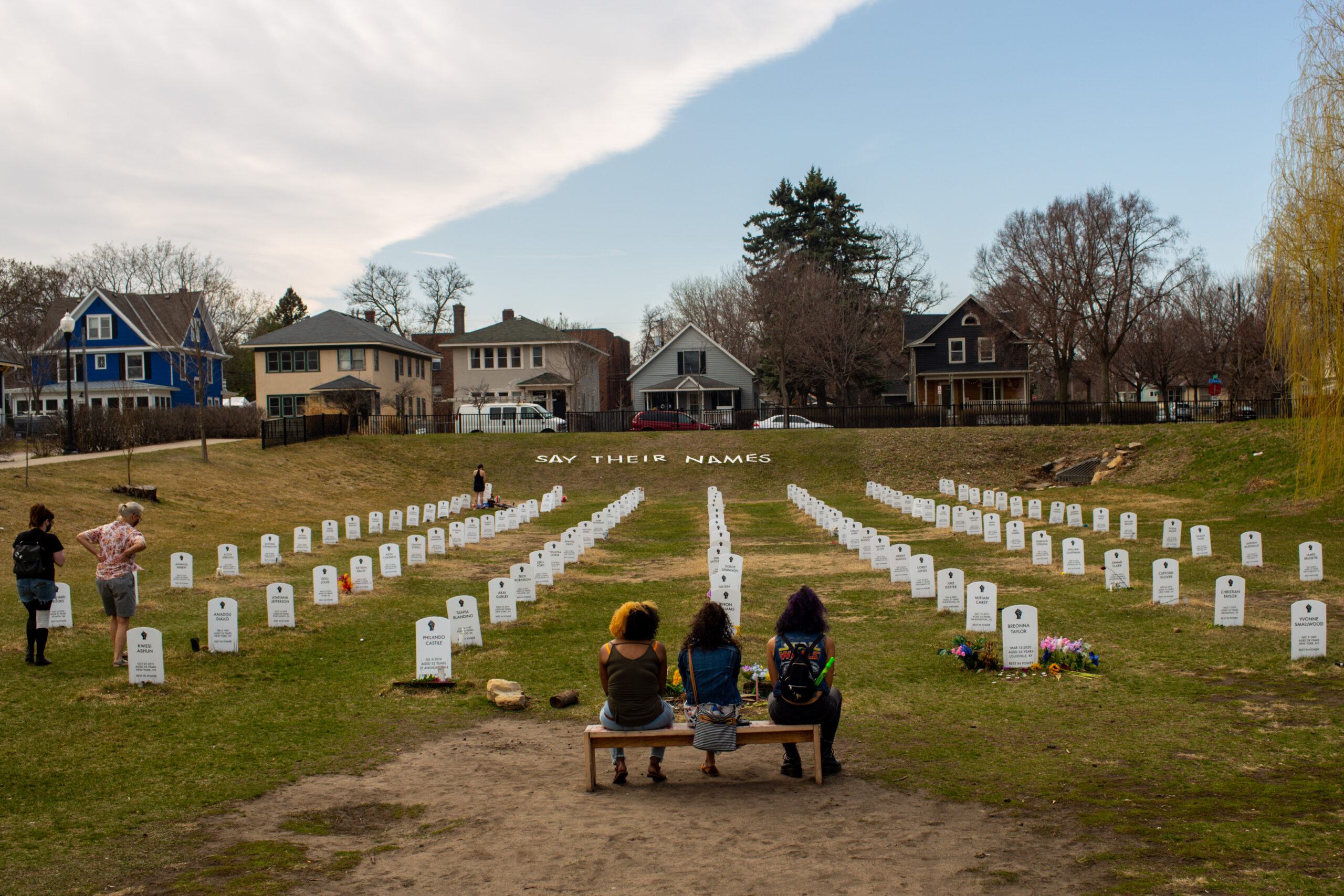 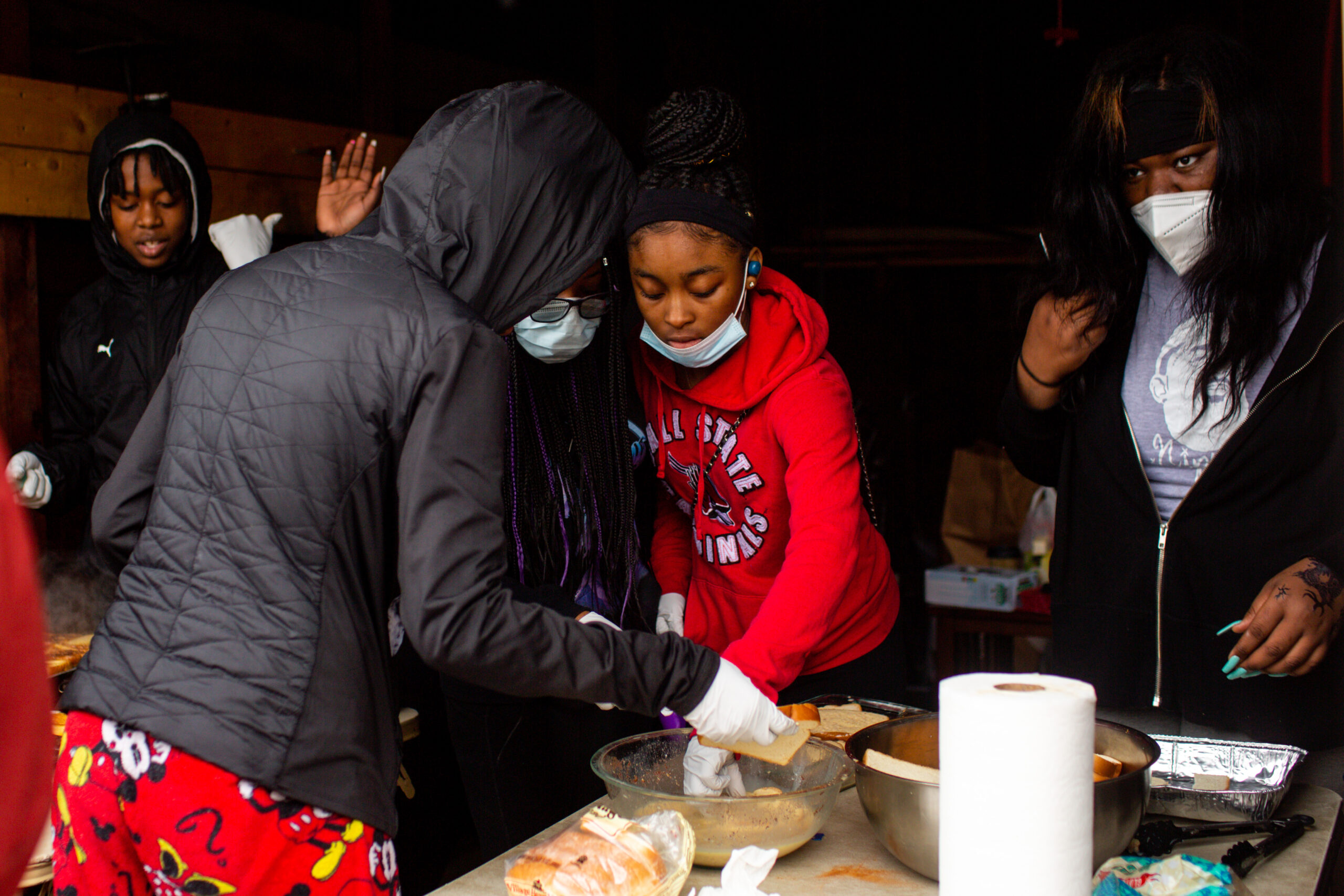 Community members take turns cooking on the griddles set up in a garage during a French toast breakfast a block away from George Floyd Square Saturday, March 27, 2021. Photo by Nicole Neri/Minnesota Reformer. 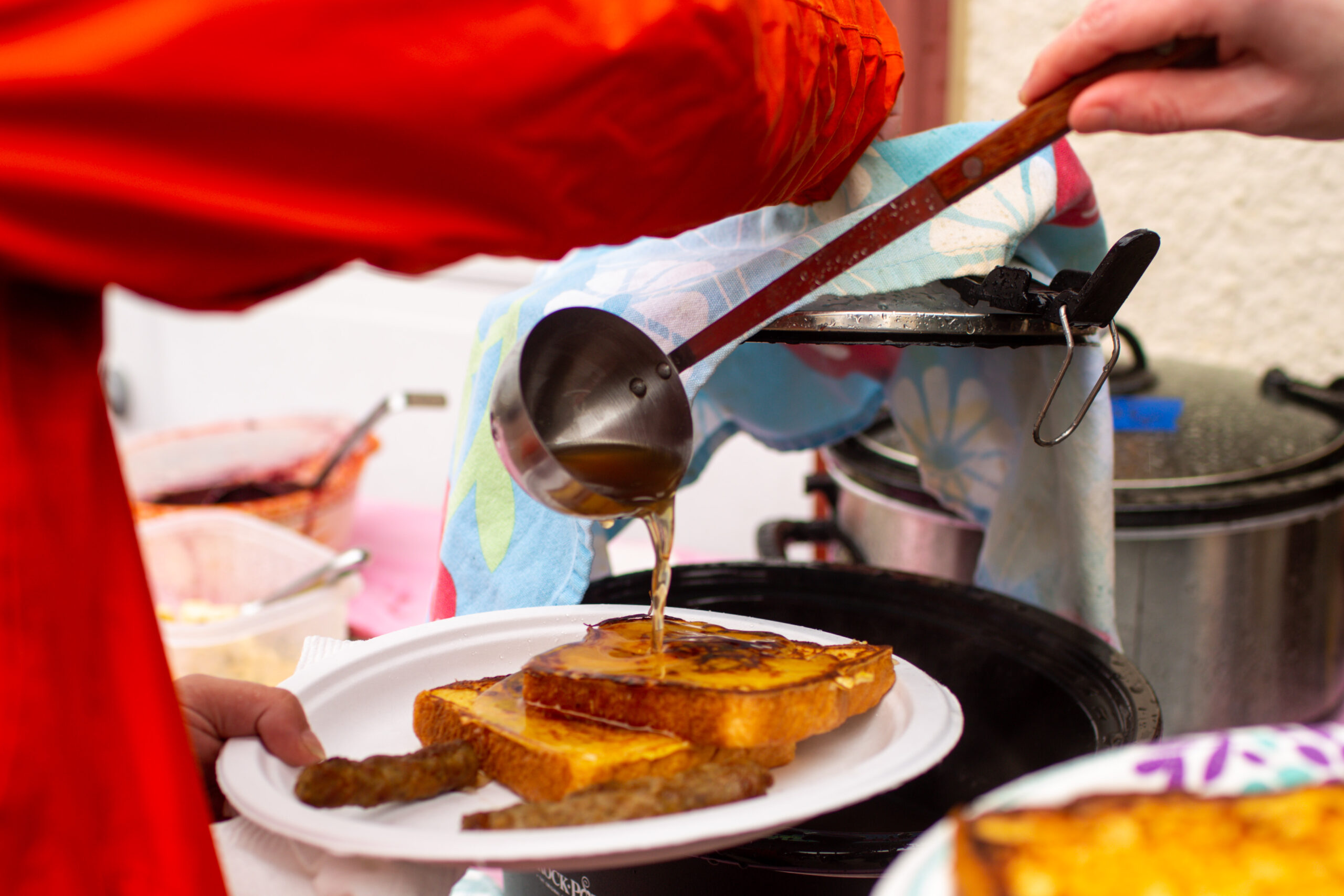 Maple syrup foraged from neighborhood maple trees is ladled out at a French toast breakfast a block away from George Floyd Square Saturday, March 27, 2021. Photo by Nicole Neri/Minnesota Reformer. 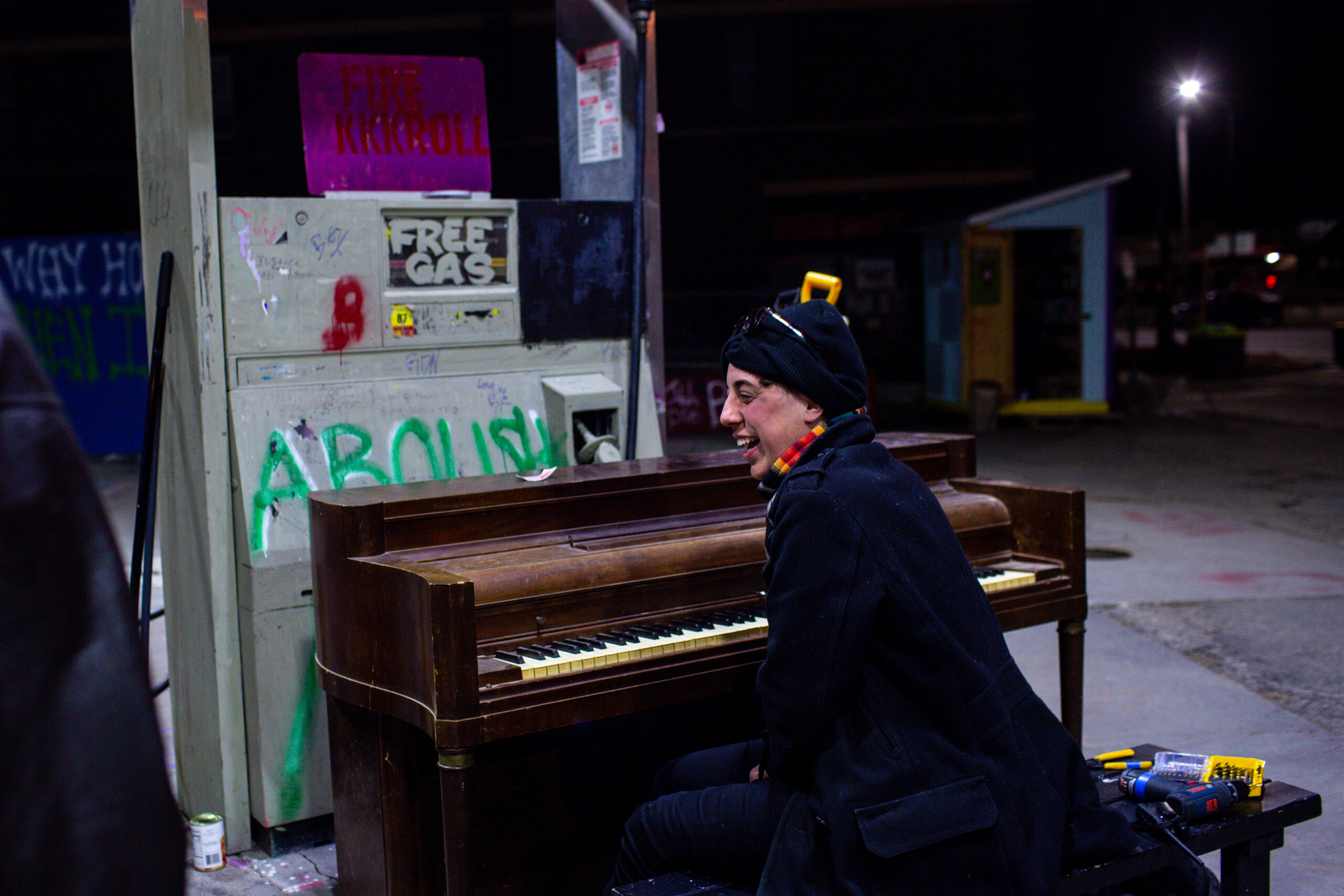 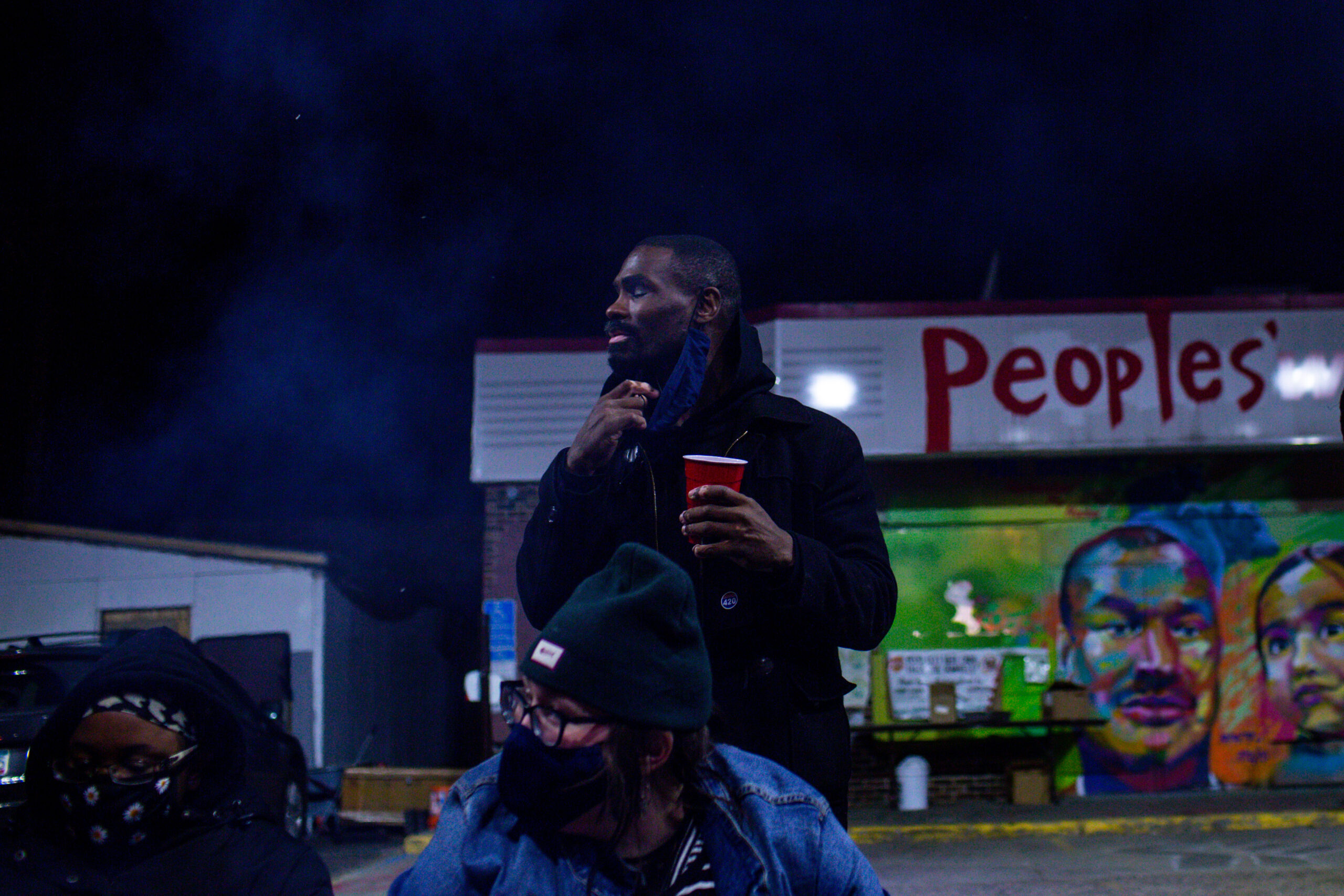 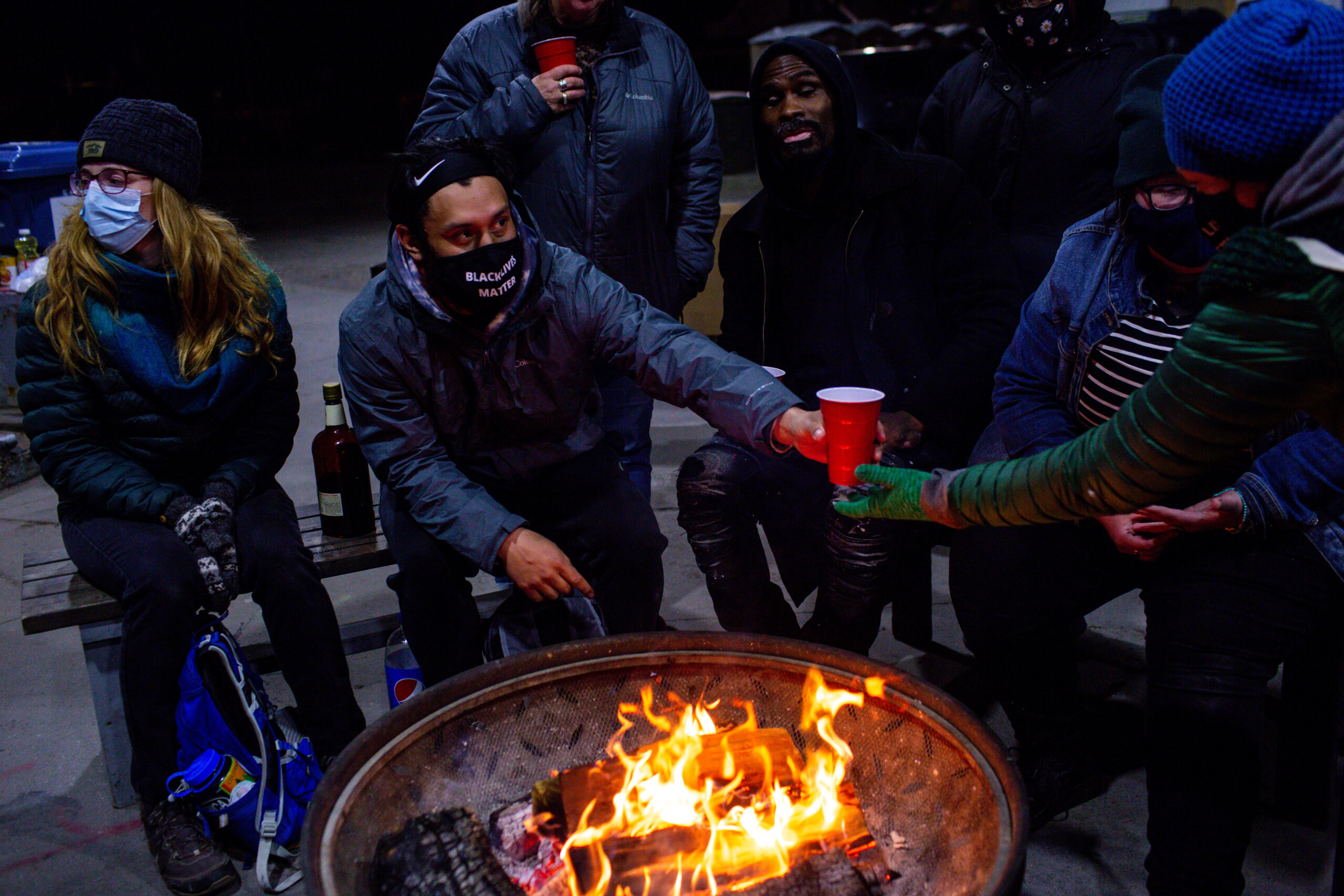 What to do with George Floyd Square has become perhaps the city’s most pressing political quandary.

The city erected the barricades around the intersection after Floyd’s killing to give people space to grieve. Almost immediately after Floyd’s death, the area became a no-go zone for police.

As violent crime increased during the summer and fall — a trend in several areas of the city and in cities nationwide — police began entering the autonomous zone during emergencies.

Meet on the Street, a leaderless group that manages the square, vows to continue holding the space, repeating the mantra “no justice, no peace” and renewing its demands, which include $156 million of programs for the neighborhood over a decade.

Then somebody was shot and killed not far from where Floyd died outside Cup Foods.

Minneapolis police said they responded to shots in the zone at 5:45 p.m. on March 6, and while headed there, 911 callers reported two people were shot and being brought to the entrance of George Floyd Square. When police arrived, they were told the victims had already been taken to the hospital.

“Officers were met with interference at the scene,” MPD spokesman John Elder said in a press release. Police have avoided confrontation with the volunteer security in the square for nearly a year now.

Police said a suspect and Imez Wright, a 30-year-old local youth mentor, got into an argument and the suspect fled in a Chevy Suburban. Two suspects were later arrested in connection with Wright’s killing.

Wright’s aunt told a TV interviewer that had paramedics handled Wright, perhaps he would have lived.

Arradondo signaled his impatience with the autonomous zone after the Wright killing. During a March 17 press conference, the police chief said, “Enough’s enough,” and indicated the square could reopen before the trial is over.

“The current situation at 38th and Chicago is unacceptable and will not and must not be tolerated,” he said. “Violence in any part of our city must be addressed, and those contributing to the harm of our neighborhoods have to be held accountable.”

He called crime stats in the area “staggering and unacceptable.” In 2019, there were three nonfatal victims of gunshot wounds in the area, compared to 18 last year. In 2019 there were seven Shotspotter activations, translated into 33 rounds of gunfire detected by a police gunfire detection device. There were 185 Shotspotter activations in 2020, with over 700 rounds detected. Robbery and assault reports increased 378% from 2019 to 2020, he said.

The chief reminded people to also remember Leneesha Helen Columbus, a woman who was five months pregnant when she was shot by her boyfriend in the zone. Officers set up their staging area about a half mile away to avoid confrontation with activists.

“One life lost to violence is one too many. And as chief I refuse to abdicate one block, one city block, to a group of individuals who choose violence over peace,” Arradondo said. “We will restore peace, safety and hope to 38th and Chicago.”

Monica Nilsson has lived near the intersection for 20 years, and is executive director of a nonprofit that provides emergency shelter and housing for homeless people in north Minneapolis. She suspects the police department is undercounting the actual number of shots fired, noting Arradondo quoted stats from just one gunfire detector.

Nilsson said people in the zone were seen picking up shell casings and throwing them in the garbage and loading Wright into a car to drive him to a hospital.

She said there’s a faction of neighbors who want the square closed, and an equal faction who don’t, who also have bonded over their desire to see it open again.

It’s a politically diverse neighborhood, but she said, “We all hear the same gunshots and the bullets that land aren’t discriminating between whose car they land in.”

In one four-day stretch on her block in March, Wright was killed and multiple shots were fired hours later. The next day, she said, six garages in her alley were struck by gunfire, and a car crashed through a fence into a backyard where a toddler had been playing minutes earlier.

The next day, a man was seen crouched on top of Cup Foods with an assault rifle on a tripod. Later that night, 30 shots rang out and an argument led to shots fired into a car and house; police didn’t respond to a second 911 call.

Finis said the brute force of the MPD engenders violence and mistrust.

The neighbors point to what they consider a show of force on March 12, one week into Chauvin’s trial, the same evening city officials announced a record-breaking $27 million settlement with Floyd’s family.

That night, sirens and cop cars flooded the neighborhood when a bizarre car chase that started a couple miles to the north meandered through the square and ended with cops — guns drawn — surrounding the pickup.

Residents also flooded the zone with their cell phones, taking shots of the driver and passengers in a tan pickup slowly driving through the square, its driver smiling and waving before surrendering.

The chase started when police said they heard shots coming from a vehicle in the area of Franklin Avenue East and Chicago Avenue South and attempted to stop the pickup. Elder said three suspects were taken into custody, one of whom had a gunshot wound to the hand. Two handguns were recovered from inside the pickup, which was impounded at a forensic garage.

But what neighbors thought was strange was the way police immediately drove the pickup out of the area “due to circumstances in the area,” according to Elder.

Finis said the neighbors counted at least 32 squad cars and a helicopter. They used cell phone videos to put together a video montage of the incident.

“I don’t know that it was staged but it was certainly an excessive response to a single vehicle, and it did seem like they were ready to come to this community,” Finis said. “We’ve seen an increased number of patrols around here. It was just very weird.”

Beyond that robust police presence to one event, other neighbors say they feel abandoned by the city.

Bruce Ferguson bought a house near the square in 2019, and said city officials’ connection to the neighborhood has been reduced to online surveys and press conferences.

“I can count on one hand how many times all council members have been in the square or been in the space to just talk to people,” he said. “In proportion to the extent that City Council talks about this space, you would think that City Council, but even more importantly, the chief of police, would try to be more present within the space to understand the social dynamics that are there, rather than making sweeping claims.”

Atkinson, the mom of a young family, said she gets lots of calls from out-of-state family worried about their safety.

“It’s hard to combat that. It’s hard to say, ‘We’re OK here with our kids.’ Sometimes, yeah, we’ve been worried and we’ve been afraid and it’s been really intense, but there’s also really amazing things like this (neighborhood breakfast) happening.”

Nilsson grew up in Highland Park in St. Paul, and said “our spirits are collapsing” from the weight of everything happening in the neighborhood. She is sometimes blocked from her alley garage by armed men. She worries about speaking up, knowing the Bloods are active in the area — making their territory known with spray paint. But she speaks up anyway.

“I don’t think people who are gang-involved are interested in shooting white women who live down the street,” Nilsson said. “Sadly, I think it is more people of color who are getting murdered or shot.”

Text of President Biden's first State of the Union address by J. Patrick Coolican March 1, 2022
If you shoot someone, you'll probably get away with it by Rilyn Eischens October 25, 2021
Jaleel Stallings shot at the MPD; a jury acquitted him of… by Deena Winter September 1, 2021