Minnesota’s metro school districts are facing worrying declines in student enrollment that will likely lead to losses in state revenue this school year, forcing districts to take on the difficult task of cutting costs during the COVID-19 pandemic.

Minneapolis Public Schools enrollment is down 4.4% compared to fall 2019, or nearly 1,500 students, while in St. Paul the decline is more than 1,000 students, or 3%. Rosemount-Apple Valley-Eagan saw the biggest drop — roughly 5%, or more than 1,400 students. Several districts — Anoka-Hennepin, Bloomington, Minneapolis and Rochester — experienced declines of more than 4% from fall 2019 to fall 2020, according to a Reformer review of data from nine of the state’s largest school districts.

The districts’ steep declines reflect a statewide trend after families frustrated with distance learning or concerned about COVID-19 pulled their children from public school districts. They opted instead for homeschooling, private schools or delaying schooling for kindergarteners — meaning public school districts are missing hundreds or even thousands of students who generate vital state education funding.

For many districts, the declines this fall were even more dramatic than anticipated in the spring — when schools set their budgets for the next school year — leaving cash-strapped school systems to address unexpected shortfalls mid-year. The shortfalls come even as they rack up additional expenses for distance learning equipment and COVID-19 safety gear.

“After this year, (school districts) can right-size the ship. They can make the appropriate cuts and then get their budgets back in order,” said Bob Indihar, executive director of the Minnesota Rural Education Association. “But this particular year, they just lost a bunch of kids and didn’t have the revenue they thought they would — so they’re in trouble.”

The official enrollment totals reported by the state later this year will provide a comprehensive look at trends in public, private and charter school enrollment. These preliminary tallies show declines in line with nationwide trends, as frustrated public school parents seek out alternatives.

Minnesota private schools, many of which held in-person classes this fall, have reported increased interest, as have virtual charter schools.

Homeschooling numbers are up from fall 2019 in many metro districts as well, increasing by roughly 50% in Elk River and Rosemount-Apple Valley-Eagan, and by more than 30% in Anoka-Hennepin, Osseo and Wayzata.

For Robinette Dunahugh-Ralston, the decision to pull her third-grade daughter from Lakeville Public Schools last fall in favor of homeschooling seemed obvious. Her daughter struggled with distance learning in the spring, and in-person school felt too risky during the pandemic. Dunahugh-Ralston said she intends to send her daughter back to public school someday — but not until the pandemic subsides and education stabilizes.

“Sending her into a school year where there was going to be constant change and variability just wasn’t going to work. The changes were too distracting,” she said.

Falling enrollment in kindergarten — which is optional in Minnesota — accounted for a significant portion of schools’ student losses, as parents skeptical about the idea of virtual learning for young children or anxious about COVID-19 in the classroom delayed schooling. The declines from 2019’s kindergarten enrollment ranged from 7% in Elk River to more than 24% in Rosemount-Apple Valley-Eagan schools.

The enrollment declines are even steeper than many districts expected early in the pandemic.

In October, Minnesota’s Association of Metropolitan School Districts surveyed more than 40 member districts about how fall enrollment compared to districts’ projections in the spring, when they adopted their 2020-21 budgets. The vast majority reported actual enrollment was down compared to their projections, with declines ranging from about 1% to nearly 5%.

“If you were declining 25 students, and they were all in fourth grade, then you could eliminate a fourth grade class,” and a fourth grade teacher, Croonquist said. “That’s not how it works, obviously.” For instance, if each class has 23 students instead of 25, the district needs the same number of teachers and achieves no savings but loses important per-pupil state funding for each child no longer enrolled.

As a result of the declines, the 40 districts surveyed will receive roughly $74 million less than they planned.

Anoka-Hennepin Schools will lose about $7.7 million in per-pupil funding from its $540 million budget, although some of the loss will be offset by savings in other areas, Chief Financial Officer Michelle Vargas told school board members this fall.

Minneapolis Public Schools also expects revenues to fall more than $7 million due to enrollment declines, Senior Financial Officer Ibrahima Diop told school board members last month. Meanwhile, the district will rack up nearly $59 million in unbudgeted expenses for technology, facility and staffing costs during the COVID-19 pandemic, about half of which will be covered by state and federal aid, he said.

This year’s expenses and revenue losses will worsen the district’s existing financial woes. Minneapolis Public Schools will likely deplete its reserves during the 2023-24 school year, according to a recent report.

The dip in student enrollment isn’t just a metro problem — the majority of schools in rural Minnesota saw declines too, said Indihar of the rural school association.

Losses were generally smaller, however. Rural schools were more likely to have in-person classes or hybrid schooling — which may have encouraged families to stay enrolled — while metro area schools spent all or most of the fall term in distance learning, Indihar said.

Still, even rural districts will have to reconcile the revenue losses. The rural school association is advising districts to avoid layoffs since the enrollment declines might be temporary, but cutting staff might be the only option for some, Indihar said.

Schools may see increased enrollment throughout the year, boosting their funding formula allowances and helping them avoid budget gaps. But for now, their financial futures are uncertain.

“If those numbers stay down, and we don’t have students coming back, it’s significant,” Croonquist said. 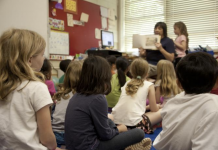