He did not go to Florida for Thanksgiving. He is not a rich man, unless you count the haters.

Minnesota Gov. Tim Walz spoke to Minnesotans Wednesday evening from the Governor’s Reception room at the State Capitol, to discuss the latest steps in his response to COVID-19. Pool photo by Glen Stubbe/Star Tribune.

Editor’s note: An image from a Facebook post has been removed from this story because it originally appeared in a private Facebook group. The reporter of this story improperly used a pseudonym to gain entry into the group, in violation of Reformer ethics rules.

His net worth in 2017 was about $13,500, according to the government watchdog group Center for Responsive Politics.

And for Thanksgiving this year, he ordered a take-and-bake dinner from Colossal Cafe on Grand Avenue in St. Paul.

These unrelated facts are discoverable with a quick Google search.

But they contradict a pair of outlandish rumors that nonetheless gained surprising traction on social media in the days leading up to Thanksgiving — that Walz is worth $400 million and would spend the holiday in Florida. 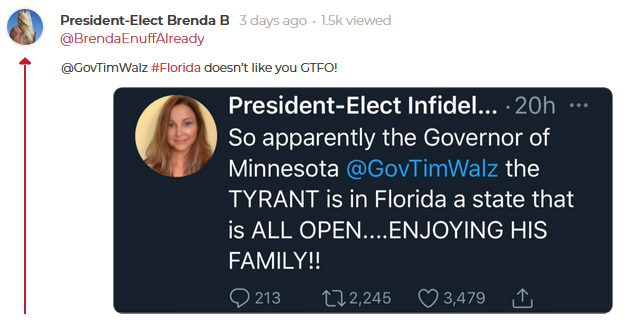 The dual rumors are the latest attempts to discredit Walz, who has faced intense backlash over his response to the COVID-19 pandemic.

“Certainly, that would be quite the story if I had amassed $400 million,” Walz said in a Reformer interview.

The rumors illustrate how the national trend of seeding disinformation about political enemies on social media — a favorite tactic of President Donald Trump and his supporters — is trickling down to state and local venues.

Whatever Walz’s shortcomings as a governor, greed does not appear to be one of them. Prior to politics, Walz was a teacher, coach and soldier in the National Guard — not exactly the most remunerative professions. During his 12-year tenure in Congress, he rejected cost-of-living adjustments to his pay, effectively donating more than $80,000 to the U.S. government. 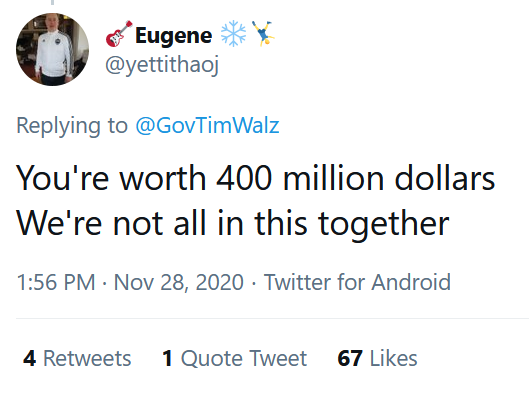 “I find the irony of it, too, because I’m an author of the STOCK Act in Congress that has sent so many of my colleagues to jail,” he said, referring to a 2012 law intended to stop insider trading by members of Congress and other government employees, who were known to be trading securities based on inside information they were getting from the government.

Walz has released his tax returns going back more than 10 years. The release of his most recent return has been slowed because of the COVID-19 pandemic, according to spokesman Teddy Tschann.

Still, thanks to these documents, we know Walz is not worth $400 million.

His largest asset is a rental home he and his wife own, which is worth at least $250,000. His net worth is smaller because they have outstanding loans, including two mortgages. His other major assets are a life insurance policy and pensions from his teaching and military careers.

Tschann says the rumors have had an outsized impact.

“When you start receiving a lot of calls on the same topic that triggers a flag. So when we started getting calls asking why the governor was spending Thanksgiving in Florida, the whole office was like, ‘What, that doesn’t make sense,’ ” Tschann said. He has even been questioned by apolitical friends and family. “It’s just straight up trash news.”

Walz said he believes the rumors are part of a larger effort to discredit the administration’s response to the COVID-19 pandemic.

“If there’s someone out there who thinks I’m worth $400 million and flying to Florida and laughing about all this, why would they wear a mask?” Walz asked. “Why would they believe they shouldn’t have Thanksgiving? That’s why this gets so dangerous.”

The rumors spread on social media, helped along, no doubt, by uncritical reposts:

These are not the first rumors about Walz and his family.

“It has impacted my family,” Walz said, “There have been those, including elected officials, who thought it wise to bring them into these fights, which has been very disruptive.”

He declined to elaborate, but it was likely a reference to an incident during the unrest following the police killing of George Floyd. Several right-wing personalities alleged his daughter had tweeted “information about National Guard movements & capabilities.” In fact, she tweeted the banal observation that, though the National Guard had been deployed, it would take time for them to get to Minneapolis and they would not be present immediately.

The newest rumors appear to have been borne independent of each other.

The claim that Walz would spend Thanksgiving in Florida seems to have originated with a single person at a Nov. 21 anti-mask/anti-lockdown protest outside the governor’s mansion. The earliest online references are a pair of comments from Nov. 22:

The identity of the Olmsted County rumormonger remains a mystery.

The origin of the claim that Walz is worth $400 million can be traced to an anonymously written article on Starsgab.com.

Starsgab describes itself as providing “the latest articles on Celerity [sic] Wiki, Biography, Celeb Net worth, Awards, Height, Weight and all other entertaining stuff.” Its definition of celebrity is broad enough that it stretches all the way from k-pop boy bands to regional politicians, including Walz.

Much of the article about Walz is lifted from Wikipedia, though some of the information is opaquely sourced and dubious (like the claim about his net worth). The site also claims, without citation, that his feet are “size 9 UK.”

“The thing about these two rumors, and they’re relatively harmless and fake, and people will believe what they want to believe,” Walz said, “but it will spread into false information about the vaccine. That’s what really worries me about this. We have got to ratchet that back down.”

Text of President Biden's first State of the Union address by J. Patrick Coolican March 1, 2022
Jaleel Stallings shot at the MPD; a jury acquitted him of… by Deena Winter September 1, 2021
The hypnotherapist who helped fuel the never-ending hunt for… by Megan O’Matz, ProPublica May 24, 2022