Minnesota supporters of President Donald Trump are reacting to the election with a mix of conspiracy mongering and fear and sadness.

On Thursday afternoon, votes were still being counted in half a dozen swing states, and the presidency was still up for grabs. As the path for a Trump victory grew narrower, the reaction on the left has been a mix of cautious optimism, disappointment that it’s not a landslide and anxiety over their own unlikely path for control of the U.S. Senate.

Those on the right in Minnesota, on the other hand, are reacting to the current vote count in one of two ways: Embracing conspiracy theories, or falling into a despondency that mirrors the left’s 2016 doldrums.

Perhaps because social media is such fertile soil for them, conspiracy theories are the most common reaction online. The majority are vague insinuations of “voter fraud”: 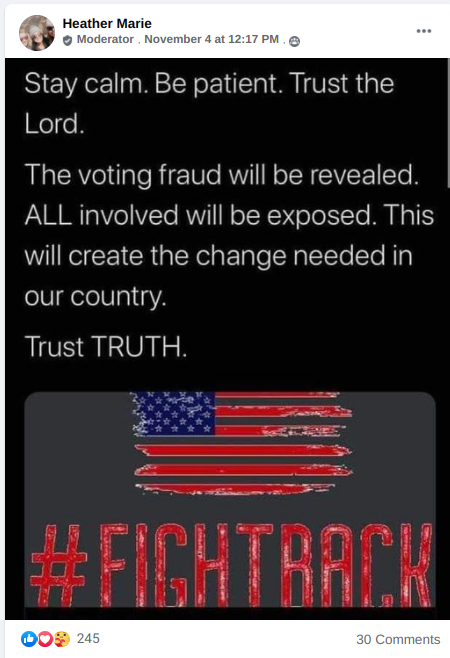 Two stand out as being widespread and specific, however. The first claims that biased election judges handed out sharpies to Republican voters, which (depending on the version) cannot be read by vote counting machines or will result in ballots being thrown away. This seems to have begun as local fake news from Arizona, but has spread around the country, including to Minnesota:

One of the more focused, but outlandish theories is an outgrowth of Qanon. Briefly, Qanon is a sprawling conspiracy theory that claims Democratic elites are secret satanic pedophiliac overlords, and Trump is waging a complex war to expose them and their media enablers. A recent poll found that half of Trump supporters believe the core tenants of the theory.

The related election conspiracy theory claims that Trump had all official ballots printed with “non radioactive isotope watermarks” that will unveil massive voter fraud and a Trump landslide victory. The theory has a fatal flaw, however: The federal government does not print ballots, individual states do, and there is no substance behind the claims of voter fraud.

“BQQM 💥” opens the most common iteration of the theory (the Os have been replaced with Qs.)

From there, it quickly spread to more mainstream social media sites like Facebook and Twitter, where several Minnesota Trump supporters have shared it. Reactions to the theory are mixed. Some are jubilant at the information:

While others point out how unlikely this scenario is and caution their fellow Trump supporters about the dangers of fake news:

This kind of conspiratorial thinking can justify “lone wolf” violence, as Qanon has in the past. In Minnesota, violent rhetoric is rare and vague, but is popping up.

The conservative Veterans Party of Minnesota invoked the Battle of Athens, Tennessee, in one post. The battle was a shootout between armed WWII veterans and corrupt local politicians — including a sheriff — in two small towns on the night of county elections in 1946.

A user in another right wing group wrote, “What every person in this country should be asking themselves, are we witnessing a political coup. If so what are you prepared to do? Are you going to give it a free pass like it’s just a ‘normal’ election or are you really prepared to rise up?”

More traditional conservatives have a more conventional outlook on politics. They are upset by the results, but don’t blame Biden’s current lead on a conspiracy and are not insinuating the need for violence.

This camp of conservatives voice fear, anger and confusion that should invoke empathy in any liberal who remembers November 9, 2016: 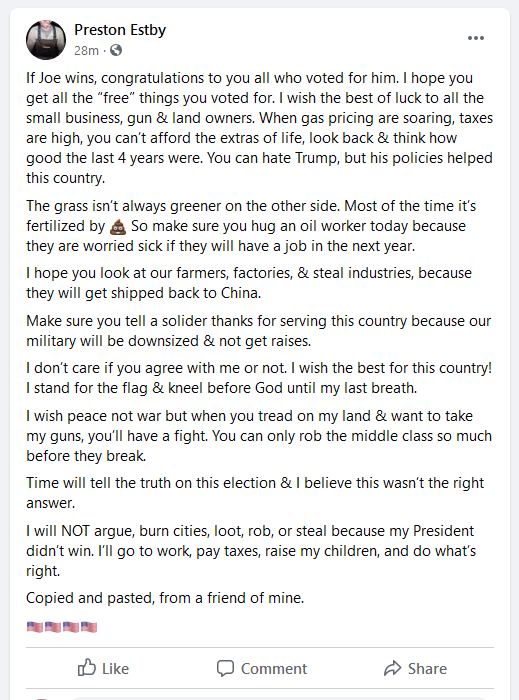