And when the legislative session begins Jan. 5, Minnesotans should have no illusions: These interest groups and wealthy individuals will almost certainly enjoy greater access to lawmakers than the average Minnesotan after spending tens of thousands of dollars to help candidates become one of 201 Minnesota legislators.

Consider a state Senate race in the western suburbs that will likely approach $2 million in spending, featuring a rematch between Sen. Warren Limmer, R-Maple Grove, and family law attorney Bonnie Westlin, a Democrat. Interest groups on both sides are dumping cash into the district, as Republicans try to defend their narrow 35-32 state Senate majority.

A group called Advance Minnesota has spent about $200,000 on the race, most of it attacking Westlin. As the Reformer reported previously, Advance Minnesota gets significant money from a group called GOPAC, which in turn is funded by tobacco and pharmaceutical companies, Walmart, Koch Industries and a payday lender.

Pro Jobs Majority, which is the political arm of the Minnesota Chamber of Commerce, has spent more than $50,000 on Limmer’s behalf.

On the other side, the Alliance for a Better Minnesota has spent more than $300,000 supporting Westlin. That group, which is a close ally of the Democratic-Farmer-Labor Party, is part of a constellation of groups — including the 2020 Fund and Win Minnesota — which operate on the strength of mostly big-dollar donations and have become a mainstay of Minnesota progressive politics.

Alida Messinger, a descendent of the Rockefeller fortune and ex-wife of former Gov. Mark Dayton, has donated more than $1.7 million to the 2020 Fund, WIN Minnesota and the Alliance for a Better Minnesota this year, according to the reports filed this week.

The state teachers’ union and its national sister organization, the National Education Association, have together given at least $1.3 million to the groups allied with the Alliance for a Better Minnesota. The American Federation of State, County and Municipal Employees — a major public employee union — has given $500,000 to the groups, while the Service Employees International Union has donated at least $700,000.

There’s a relatively new player on the scene, as well: A group called State Victory Action, which operates out of a PO Box in Raleigh, N.C., gave WIN Minnesota and the 2020 Fund contributions totaling nearly $1.5 million in September.

Public radio in Maine, another state where State Victory Action has been active, reports the group is funded by wealthy liberal donors like George Soros, Tom Steyer and Donald Sussman.

Although it can seem absurd that millions of dollars are being spent to determine who will take a job that pays $45,000, the spending is not surprising — given the stakes.

Business groups are desperately trying to prevent a Democratic-Farmer-Labor “trifecta,” meaning full control of the state Legislature and the governor’s office.

The Legislature will set a two-year budget next year in the face of a $4.7 billion budget deficit, deliberate on a continued response to the pandemic and take up issues like paid family leave and business regulations that could cut shareholder profits.

Rarely noted but hugely important: The next Legislature will use the census to draw up new legislative and congressional maps. A DFL trifecta could draw favorable maps, sending Republicans into the wilderness for a decade, much as Republicans have done to Democrats in states like Wisconsin.

The money has been catalyzed by permissive campaign finance rules in the wake of Supreme Court decisions that take a dim view of the regulation of campaign spending on First Amendment grounds.

George Beck, chair of Minnesotans for Clean Elections, said the best solution given the legal constraints is full transparency “so that it is clear who is seeking influence.”

Beck also said he hopes for an improved system of public financing of campaigns to diminish the power of special interests, and an eventual return to political contribution limits.

At the center of the money chase is DFL Chair Ken Martin, who helped set up some of the progressive allied groups before he became a prodigious fundraiser as party chair, leading to chatter that he’s a potential future chair of the Democratic National Committee.

Just as the House and Senate DFL caucuses have outraised their respective counterparts, the DFL Party significantly outraised the state GOP.

The DFL’s cash advantage mirrors national trends, in which Democrats across the country have raised eye-popping sums by a base that is furiously engaged in the effort to defeat the party of President Donald Trump.

A fundraising advantage is nothing new for the Minnesota DFL, however, especially in the past decade.

“There’s this perception that Republicans are the big-money party, but year after year we get outspent by Democrats two-to-one or three-to-one,” longtime GOP operative Billl Walsh told MPR News.

The Senate DFL raised $5.6 million this year compared to $1.9 million by Senate Republicans.

Senate Majority Leader Paul Gazelka, R-East Gull Lake, told the Star Tribune he was committed to not being significantly outraised this year, as has become the norm.

“I said we’re just never going to let that happen again,” Gazelka said. “And so money will not be the determining factor in this election. We’re able to compete.”

Gazelka has turned to the Davis family for help. Mark, Martin and Mitch Davis, whose businesses include everything from agribusiness to fancy kitchen countertops, have each given $100,000.

Stanley Hubbard, whose broadcasting empire includes KSTP, has given $60,000 to the Senate GOP.

Also notable, the Minnesota Police and Peace Officers Association has contributed $100,000 ahead of what is expected to be another battle over changes to policing and criminal justice reform next year.

Martin said the Senate DFL’s massive haul is a sign of enthusiasm — donors are sensing they will retake the Senate.

“I think we’re gonna win that back,” Martin said. 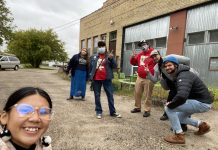