Home Government & Politics As committee examines Met Council, a primer: What is it? How did...
Facebook
Twitter
Email
Print

No Minnesota government agency inspires more heat — and with it, less light — than the Metropolitan Council. Composed of 17 appointees of the governor, the Met Council, as it is known, is responsible for transportation, housing, land use, parks, and sewer planning and operations in the Twin Cities metropolitan area.

The late Arthur Naftalin, who was the first Jewish mayor of Minneapolis, lauded it as “the nation’s most innovative approach to the management of metropolitan problems.”

But conservative activists and many suburban elected officials don’t like how an unelected body levies taxes at will and dictates their land use decisions. Rep. Tony Albright, R-Prior Lake, while introducing a bill to restructure the Council in 2018, went as far as to call it “a monster.” Regional planners and urbanists say that’s a smokescreen for efforts to allow unchecked suburban sprawl at the behest of developers and the suburban tax coffers they fill.

And now, once again, Minnesotans are debating the purpose of the Met Council as federal transportation officials next year decide whether or not the Council complies with federal law. In an executive order, Gov. Tim Walz in August created a blue ribbon committee to review the Met Council’s governance structure and services. Members of the committee include a roster of local government officials, Met Council veterans and experts in policy and regional planning. They first met on Sept. 14 and plan to meet every two weeks until early December.

How did the Met Council come to be in the first place?

As the Twin Cities grew 100 years ago, its communities fought over sewage, taxes and self-determination. The Twin Cities was a never ending battleground between jurisdictions and the people who lived in them. By the 1930s, the Mississippi River was so polluted because of uncontrolled growth that people couldn’t swim or fish in it. Minneapolis and St. Paul got together and built a sewage plant near Pig’s Eye Lake, a mile southeast of Downtown St. Paul. It still exists today.

The Twin Cities proper weren’t alone. Crystal, today a northwest suburb, wanted its own sewer system and incorporated so that it could levy taxes to pay for it. But some residents did not want to pay for it, so they broke away and formed New Hope. Then in the ’50s, New Hope residents built their own sewer.

Growth in the suburbs intensified with the Federal Housing Act of 1954. St. Louis Park’s city limits began to resemble a turkey when it annexed parts of Minnetonka because it had what Minnetonka didn’t at the time: water and sewer service.

Around this time, 3M moved their headquarters to Maplewood, causing residents to fear that one day, St. Paul would annex them for taxes. They ended up incorporating in 1957. Communities across the Twin Cities took advantage of lax incorporation rules and began to incorporate en masse.

The sewers were so overwhelmed that Bloomington had to distribute bottled water to some of its residents who had private wells tainted with sewage. After experimenting with different ways to control growth, the Legislature finally created the Met Council in 1967. In 1970, it began to consolidate and modernize sewer service throughout the Metro.

Water is the most important resource for development, so there was little point regulating the local sewer system without also regulating land use. In 1969, the new Met Council rejected a proposed airport in Ham Lake — boosted by business elites and powerful interests — because of its impact on the Carlos Avery Wildlife Refuge.

The Met Council soon managed homes for families to rent and distributed Section 8 housing vouchers. In 1976, the Metropolitan Land Planning Act required the Met Council and local communities to come up with a plan for what the Twin Cities would look like in 1990, and every five years after that. In 1995, the act was changed to require these plans to be updated every 10 years.

Since then, regional planning has focused on looking out 30 years from the most recent census. Census data is important to the Met Council because it uses it to plan for housing, jobs, transportation, parks, trails and sewers. Using this plan, every city, county and school district in the Twin Cities has to outline in a “comprehensive plan” how it will implement the Met Council’s plan. Every Twin Cities community has been working on this for the past six years, and Minneapolis’ example was credited with being the first in the nation to end single family zoning in an effort to increase density.

For the better part of a half century, the Met Council has also been doing transportation planning and funding. Not only does it model where people are likely to go 30 years down the line, it helps run a federally-required board that decides which local transportation projects deserve federal funds. Known as the Transportation Advisory Board, it recently funded Metro Transit’s Route 54 extension from Downtown St. Paul into Maplewood, as well as new bridges over the Midtown Greenway.

In 1994, it absorbed what is now Metro Transit. Today, Metro Transit along with private contractors operate close to 2,500 miles of bus routes that connect Minneapolis and St. Paul with places like Anoka, Mound and Stillwater, as well as Metro Mobility and Transit Link, which serves areas that don’t have regular transit service.

At the same time, the Met Council also began envisioning the future of Twin Cities parks.  It collects data from park visitors and has funneled over $35 million to finish projects in recent years like the natural pool in North Minneapolis and the Bruce Vento Trail on the east side.

Given all this power, influence and money, the agency’s critics have been left to wonder who is accountable. Being the only governing body of its kind in the nation that isn’t fully elected, some wonder if the Met Council is treating everyone in the Twin Cities fairly. A 2011 report from the Office of the Legislative Auditor found the Met Council fraught with mistrust and recommended changes, including staggering members’ terms and electing some members.

The Citizens League made similar recommendations in 2016. In 2018, Jason Lewis, who represented Minnesota’s 2nd Congressional District at the time and is now running for U.S. Senate against Sen. Tina Smith, tried and failed to strip the Met Council of its ability to direct federal transit dollars. Also in 2018, the Legislature passed a bill that was ultimately vetoed by then-Gov. Mark Dayton changing the Council’s leadership to 29 local elected officials.

That’s where the new blue ribbon committee comes in. Mary Liz Holberg, a Dakota County commissioner who lives in Lakeville and chairs the committee, has long wanted to change the structure of the Met Council. “The agenda lurches back and forth depending on the governor rather than the interests of the region,” Holberg said.  “We must understand where investments go and why, and develop criteria for allocating money to reflect the values of the region as a whole.”

The biggest political problem, however, is that governors of both parties have refused to relinquish the immense power they wield by making appointments to the Met Council. To give up that power would leave the office of governor weaker than the way they found it. The appointments are also a good way for governors to curry favor with important constituencies.

Met Council observers are doubtful whether or not the committee will accomplish anything. Federal law requires that 75% of affected Twin Cities communities — as well as the largest city in the Metro — agree with the governor to follow through on any changes.

The composition of the blue ribbon committee is already under scrutiny. Noah McCourt, who has autism and serves on the Governor’s Council on Developmental Disabilities, wondered why there wasn’t a single person with a disability on the committee.

Walz gave a pro forma endorsement to the committee’s work in a news release, saying “I have great respect for the leaders on the committee, and I trust that they will complete this work thoroughly and thoughtfully.” His office did not respond to further requests for comment.

Advocates have different ideas to reform the Met Council. Mayors of three suburban cities, who are on the committee, penned an op-ed in the Star Tribune in 2018 supporting staggered terms. Some want it to be fully elected, like Portland’s Metro, or even composed of local elected officials like similar organizations in the rest of the nation.

A Met Council of appointed elected officials “allows regional leaders to get together, caucus, and prioritize” issues that matter, McCourt said.

Atlanta has taken this approach of relying on elected officials. Lax state planning laws and changes to federal policy in the 1990s empowered politicians who despised coordinated land use planning and encouraged expansive sprawl. The result has been uneven growth, with jobs, roads, sprawl and mostly white people in some areas, and  concentrated poverty in others. And for nearly everyone: Some of the longest average commute times in the nation.

Can the Met Council do its job to serve the best interests of the region? Jim Erkel thinks so, without meddling from the Legislature. He has been following the Met Council since he became a lawyer for the Center for Environmental Advocacy 25 years ago. “The Council has the power to be effective in regional planning, but micromanagement by the Legislature or self-inflicted wounds don’t do a whole lot,” he said during a recent interview as the sounds of the Green Line trains — yet another product of the Met Council — passed by in the background.

As for the blue ribbon committee and its potential impact?

Members of the Blue Ribbon Committee meet virtually every other Monday afternoon until December 7. The meetings are streamed online. 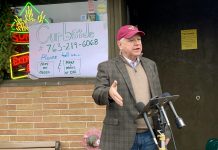