A federal lawsuit was filed Tuesday morning against a private security company that was recruiting former military personnel to “guard” Minnesota polling places during the upcoming election.

The recruiting, which was first reported by the Washington Post, alarmed civil rights and voting rights activists who fear it’s an effort to intimidate voters.

The lawsuit was filed by the Council on American-Islamic Relations (CAIR) Minnesota and the League of Women Voters of Minnesota, which alleged in court documents that the company Atlas Aegis LLC and its principal Anthony Caudle would use armed ex-soldiers to target Antifa and those who support Black Lives Matter.

“The threat of privately funded, heavily armed, militias prowling polling sites is a direct assault on the Voting Rights Act and our democracy,” the lawsuit says.

Federal law prohibits voter intimidation, and Minnesota law requires that voters be allowed to go to and from polling places without unlawful interference, and only election judges and people voting or registering to vote are allowed within 100 feet of polling places. Police officers are prohibited from being within 50 feet of an entrance to a polling place unless summoned for help.

“Based on our experience with the Muslim community, we understand that many people who are intimidated by threats of violence at polling places will choose to remain at home and lose their right to vote,” said CAIR Minnesota Executive Director Jaylani Hussein in court documents, pointing to the effects of the 2017 bombing of a Bloomington, Minn., mosque.

“The presence of armed outside contractors at polling places would constitute intimidation and violate the law. I request this company cease and desist any planning and stop making any statements about engaging in this activity,” said Minnesota Attorney General Keith Ellison. “We don’t expect to have to enforce our laws against voter intimidation, but we will use every resource available to us and all the power of the law if we have to.”

Late Tuesday, Ellison announced his office is formally investigating Atlas Aegis and that a civil investigative demand was sent to the Tennessee-based company seeking to gather information about who the company is hiring, what their roles will be, what training they will receive, and how they will meet state licensing requirements.

Ellison said the existence of such investigations are not usually disclosed, but that his office was choosing to do so due to heightened public interest and the proximity of the November election.

The Washington Post reported that Caudle said his client was a “consortium of business owners and concerned citizens,” but that he declined to name them.

“To be considered for this assignment, a SOF [special operations forces] background is mandatory,” read an alleged Atlas Aegis job posting filed as an exhibit in the lawsuit.

The plaintiffs are seeking a court order prohibiting armed agents within 2,500 feet of Minnesota polling places or any threats to send them.

Julia Dayton Klein, an attorney for the plaintiffs, said in an interview that they are seeking to discover the identities of those who may have been recruited.

The League of Women Voters of Minnesota said in court documents that voters have expressed concern to them about the threat of armed guards at polling stations, diverting the organization’s resources.

Atlas Aegis did not respond to a request seeking comment. The organization’s website states that Caudle served in the military and then worked in law enforcement for 23 years. 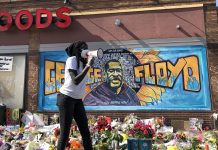 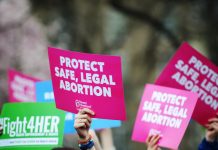