Minneapolis could be among the first major American cities to create a so-called truth and reconciliation commission — like the one made famous in post-apartheid South Africa — to document the city’s racist history and address its enduring inequities.

City Council Vice President Andrea Jenkins introduced the proposal in a committee on Wednesday with all 13 council members voting in favor. The council must vote again to approve it at their meeting on Friday.

“We are in some very difficult and challenging times in our city and our nation,” Jenkins said. “We must tell the truth and then begin to address that truth.”

The Minneapolis City Council has in recent years placed addressing racial disparities at the top of their agenda, creating a Division of Race and Equity four years ago and including racial equity for the first time in the city’s comprehensive plan last year.

The police killing of George Floyd in Minneapolis in May brought national attention to the city’s racial inequities and launched a movement of racial reckoning across the country, with some calling for a national truth and reconciliation commission.

Following Floyd’s death, the Minneapolis City Council and Hennepin County declared racism a public health crisis this summer. The Minnesota House of Representatives, where Democrats hold a majority, approved a similar resolution, but it was never brought up in the GOP-controlled Senate.

In her proposal, Jenkins lists the numerous historical wrongs committed both in Minneapolis and the state: colonization, slavery, the execution of 38 Dakota men in Mankato, the annexation of Dakota land to build Minneapolis, redlining, mass incarceration, relocation and termination, the destruction of Black neighborhoods for freeways, and enduring systemic racism in schools, business and government.

These have contributed to Minneapolis having among the widest racial disparities in the country in terms of income, home ownership, incarceration, homelessness, education and health outcomes. For example, the median income for white households is $68,000 and just $30,000 for Black households.

The proposal directs staff to present a report on its findings to the council in January, but the entire process will take years. One of the goals of the proposal is to eventually create a truth and reconciliation commission.

Commissions in other places have focused on singular events: genocide, civil war, compulsory boarding schools. The Minneapolis proposal is far more wide-ranging, seeking to examine centuries of oppression. There’s no estimate how much the effort would cost but could certainly require substantial funding to potentially hire more staff and outside consultants.

It’s also unclear what action the city might take to redress the wrongs. Would the city pay reparations as previous commissions have recommended?

Ebony Adedayo, with the city’s equity and inclusion team, told the committee on Wednesday that there must be an emphasis on rectifying injustice, not just airing grievances and traumas.

The most famous truth and reconciliation commission was established in South Africa in the 1990s as a way for the country to confront the harms of apartheid as the country looked to shed its racial caste system and become a free democracy.

The South African commission gave some 21,000 victims of human rights abuses a platform to testify about their experiences — some of which were broadcast live on TV and radio — and it granted amnesty to some perpetrators who confessed to their wrongdoings before the commission.

The commission also made recommendations for reparations, policy changes, and even prosecution of wrongdoers in a massive report documenting its findings.

Canada also ran a commission from 2008-2015 to document the abuses and lasting impact of its Indian boarding schools aimed at assimilating Indigenous people into the white mainstream. Canada agreed to pay billions in restitution to former students, even before the commission was formed.

Sen. Elizabeth Warren and U.S. Rep. Deb Haaland, one of the first Native members of Congress, introduced a bill in September to create a similar commission on the United States’ own compulsory Indian boarding schools, which existed into the 1970s and had rampant physical and psychological abuse.

With bipartisan support, Maryland created a lynching truth and reconciliation commission in 2019. Greensboro, S.C. had a commission to review the death of five protesters at a 1979 Ku Klux Klan rally, but ultimately failed to find enough support in the city to carry out its recommendations. 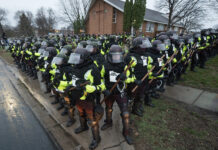