Back in March, John Smith parked his Prius in front of his home in Saint Anthony Park one day. That night, he heard metal grinding against metal. He thought nothing of it; maybe someone was having car issues they were working on, or maybe a nearby house renovation was running late into the night.

The next time he got into his Prius and started the car, his car was running like a dragster because his catalytic converter — which acts to decrease the harmful chemicals in car emissions — had been stolen. Even with his insurance, a replacement cost around $500. Without insurance, it could’ve cost him anywhere from a few hundred to $3,000 or more.

Then it happened again, again late at night. He heard that all too familiar metal-on-metal sound, and when he ran out to see what was happening, the suspects were gone. And with them, his second catalytic converter in seven months.

“I reported [the thefts] to the St. Paul police, but both times they said we can’t really do much,” Smith said. “There’s no markings on the converter. It’s especially hard when they do it at midnight, and there are no cameras on these streets.”

Across the Twin Cities metro area and the nation, this past year has seen a massive spike in catalytic converter theft, a mysterious scourge thought to be a new and lucrative crime of opportunity related to the pandemic. The devices on the underside of cars contain valuable metals that act as oxidation catalysts and are mandated to reduce pollution. The catalytic converters contain platinum, palladium and rhodium, which have all increased in price this year. Scrappers can pocket up to $200 per converter.

The rise in catalytic converter thefts has drawn the attention of state Sen. John Marty, DFL-Roseville, who on Tuesday pushed legislation he sponsored that would ban scrap metal dealers from buying catalytic converters from anyone other than auto repair shops or auto recycling businesses. Other sellers would be limited to selling only catalytic converters for a single vehicle after providing proof of ownership.

“Unfortunately, the rise in catalytic converter thefts continues, and we need to step in to stop this lucrative crime,” Marty said in a statement. “I am hearing from a growing number of constituents and legislative colleagues who are reporting problems with theft.”

Neither Minneapolis nor St. Paul has readily accessible data on catalytic converter thefts specifically; they are lumped in with the umbrella coding of “car part thefts.” But victims, auto dealers and police say they’ve seen a dramatic increase.

How dramatic? Steve Linder, St. Paul Police spokesman, said more than 900 police reports in 2020 have included the key term “catalytic converter.” They recorded about 350 thefts in 2019, according to the Pioneer Press.

An increase in the number of catalytic converter thefts have been reported in Minneapolis, Eagan and St. Louis Park too.

William Petersen, owner of Southeast Auto in Minneapolis, said that he’s gotten more than a dozen calls about needing replacement catalytic converters this year, versus none the previous year. Priuses – whose catalytic converters are said to burn through those precious metals at far slower rates – are the most common vehicle served, though he’s also worked on Honda Accords and Honda Odysseys.

Petersen speculated on the jobs: “If I had to guess, there’d have to be at least two people involved: one to man the jack and one to use the Sawzall,” Petersen said, referring to the metal-cutting tools the culprits often use to salvage the converter.

When asked how an individual would know whether the catalytic converter had been stolen from a vehicle, he chuckled.

Area drivers have become more shrewd, he said. He’s installed metal plates to cover the catalytic converters, which make them more difficult to steal. Those parts are rarely covered by insurance and retail at around $440 installed; they’re pricey, but cheaper than the quadruple-figure cost for a new converter.

The uptick in catalytic converter thefts seems to be at odds with recent data showing that recessions don’t cause crime to increase.

Although economic uncertainties abound, there are a few factors at play, said Christoper Uggen, professor of sociology and law at the University of Minnesota.

Secondly, the catalytic converters are relatively easy to steal. All you need is a reciprocating saw to cut through the metal, many of which can be found for under $100, and a car jack, depending on how elevated the car is. The whole process can take less than two minutes. (And once a converter is stolen, don’t count on getting it back.).

“There are a few crimes where a relatively small number of people can commit a fairly high number of crimes in a relatively short period of time. This is one of them,” Uggen said. “The setting can be fairly inconspicuous if you’re not looking, because someone could be working on their car on the street — that’s not a terribly unusual sight.”

Then, Uggen said, there’s the glue that ties a number of factors together: the pandemic, which has created immense economic pressure.

People are remaining at home for prolonged periods of time, with cars often parked out front beyond a 24-hour watchful gaze. Victims of converter theft may not even realize it’s been stolen until days later.

Periods of high stress or even prolonged trauma — whether from a recession, a global pandemic, addiction or racialized police violence — can amplify the strain an individual is going through.

Though harsher punishments are not likely to dramatically reduce rates of property crimes, there are a few potential solutions, Uggen said.

Owners could install protective metal plates, like the one Petersen has installed. Or car manufacturers could come up with more technologically advanced tracking mechanisms or simply make converters less difficult to steal, rather than putting the onus on the vehicle owners.

In the meantime, St. Paul Police’s Linder advises drivers to park in their garages if possible, in well-lit areas of the street or in positions where it’s difficult to access the bottom of the vehicle.

Another potential route is policy change: In response to the stark increase in converter thefts the St. Paul City Council passed an ordinance in May that made the sale or purchase of a catalytic converter by unlicensed dealers a misdemeanor. Minneapolis has no such ordinance in place.

Though Uggen said these are steps in the right direction, they’re Band-Aid solutions for the symptoms of a larger problem.

“We have a large number of Minnesotans in poverty. We have a very frayed social safety net. We have thousands of people who are unhoused,” Uggen said. “The technology solution, the policy ones will fix this problem, but unless you fix the structural inequalities, you’re just kind of squeezing the balloon. It’d just be manifest in another crime.” 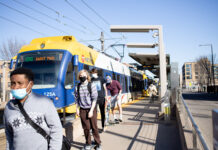