Home Government & Politics Walz on this moment: ‘I don’t think you get another chance at...
Facebook
Twitter
Email
Print

Gov. Tim Walz campaigned on the theme of “One Minnesota,” but the state he governs lately feels at times like it’s coming apart.

The COVID-19 pandemic deepened partisan and geographic divisions, as maskless marchers earlier this year demanded he end restrictions on bars, retail and other businesses even as the virus continued to spread.

The police killing of George Floyd, however, is what really ripped the state’s social fabric asunder — even if what was holding it together was illusory in the first place.

“Like so many things it only laid bare what was already there,” Walz said in the governor’s reception room at the State Capitol Thursday. “While I would have never anticipated what happened after George Floyd was killed, on that scale, I was deeply worried when I was running on ‘One Minnesota,’ that that was brewing right there. We were already splitting and it was getting harder and harder.”

In the middle of the ornate room filled with leather and velvet, gilt and crystal, Walz wore a mask and sat in a single chair in a scene that would baffle a 2019 visitor.

This may not be the governorship Walz thought he was getting, but it’s the one he’s got.

The first-term DFL governor took over a state that was the envy of many for its economy, health and education systems, social capital and sound government finances. Now, however, Walz spoke with something close to fear that Minnesota is on the brink.

“If we don’t address this issue, especially around race and inequities now, I don’t think you get another chance at it. It just becomes an irreconcilable split or division just starts to spiral down. How do we continue to be a state of choice where people want to live?” Walz asked in a wide-ranging interview with Minnesota Reformer, his first.

Nor are there resources available, even if anyone knew the solutions. In fact, the Walz administration is already preparing for an austerity budget and potential tax increases. More than $2 billion in reserves evaporated this year, and the state is facing  a projected $4.7 billion deficit for the next two-year budget.

“What I’m asking (agencies) to do is put together the whole spectrum of scenarios of what it’s going to take to get us to a balanced budget,” Walz said.

Though he wouldn’t say one way or the other, a tax increase seems all but certain in order to balance the state’s budget. He said any tax increase would have to be progressive and protect the most fragile industries, citing hospitality.

Even as Walz approaches a tax increase with trepidation, spending cuts will be no easier. They would also hurt the economy while alienating his closest allies, including unions like Education Minnesota, 80,000 teachers strong.

Moreover, cutting education could exacerbate opportunity gaps that are some of the worst in the nation — and at the center of the state’s current crises over racial equity.

About 31% of Black, Latino and Indigenous fourth graders were proficient in reading in 2017, compared to 56% of all Minnesota students. Minnesota has the nation’s second-lowest high school graduation rate for Black students.

As Walz noted, the increasingly diverse Minnesota student body — nearly 40% of K-12 students will come from communities of color by the end of his term — means that failing to teach those students will imperil the state’s future.

“The demographics are what they are: 70% of Minnesota’s workforce is going to have to come from communities of color,” he said.

As the governor mulls the longstanding disparities in education that have long vexed Minnesota policymakers, this kind of long-range thinking seems almost like a luxury given two more immediate problems: The ongoing pandemic and public safety.

The summer has seen a rash of shootings in Minneapolis following Floyd’s killing and the subsequent unrest. Rioting once again broke out in August after false reports of another police shooting.

Walz has faced criticism — including from Minneapolis Mayor Jacob Frey — for not responding to the city’s pleas for help two days after Floyd’s death, when the situation spun out of control.

Having spent 24 years in the National Guard, Walz is open about its limitations and has sought to lower expectations about what it can do to keep civil order. He gave an example of the typical guardsman: “I have to get somebody who’s doing their job at their small business in Fergus Falls to report to their unit, to get down here and then being asked to go into civil unrest and rioting that unless you were 60 years old, you’ve never seen it, like the Watts riots, on that type of scale.”

The community is closely following the trial of four former police officers charged in Floyd’s death. Convictions are by no means certain. The trial is scheduled for March of next year.

Walz said the state will be ready. “The lessons learned from this is, we need to do tabletop exercises and rehearsals on what this is going to look like.”

Walz also has to manage the state’s response to an incurable virus that threatens a resurgence once Minnesotans come indoors for the winter, as happened this summer in Florida, Texas and Arizona and other states where intense heat kept people in air-conditioned quarters.

Walz said he fears for the end of the year, when state and local government will no longer have the cushion of federal COVID-19 relief funds. He said Congress, which doesn’t have to balance its budget, must provide more help by the end of the year.

“I can pay for testing all the way up to the 31st of December. What do I do on the first of January?”

Walz said he offered to relinquish the peacetime emergency powers he’s wielded since March if the Legislature would codify his COVID-19 testing regimen and pass a statewide mask mandate. He said they refused.

“I have got legislators down in Mankato telling people no matter what, even if you have it, don’t go get tested, the governor just wants to use that to shut down your school. That is reckless, irresponsible and bordering on criminal,” he said.

In an email, Munson responded, “Unlike the governor, I trust the people of Minnesota and believe in personal responsibility and choice, so I would never make such a statement. I did send a letter to the Department of Health Monday morning raising several legitimate questions and concerns.”

Munson is referring to a state government plan to go door-to-door to conduct a survey about pandemic habits and give Minnesotans a voluntary COVID-19 test in hopes of tracking the virus.

“I have not yet received an answer to any of these questions,” Munson said. “Instead, the governor is trying to deflect with smears and accusations just as voting starts tomorrow.”

Walz had to leave the Reformer interview to talk with Senate Majority Leader Paul Gazelka about the budget crisis. The East Gull Lake Republican has led the opposition to Walz, including sacking Walz’s commissioners of the Departments of Commerce and Labor and Industry.

It was to be their first conversation since Gazelka and his GOP caucus voted down Commerce Commissioner Steve Kelley for Senate confirmation last week, even though Kelley was in the job more than 18 months. In August, the Senate ousted Nancy Leppink from Labor and Industry.

“If I’m losing on a tax vote, or if I have to compromise on the budget or whatever, but they personally just tried to destroy two people’s lives who are friends of mine … You just don’t treat people that way.”

Walz left the governor’s reception room, seemingly no closer to achieving “One Minnesota” than the day he took office. 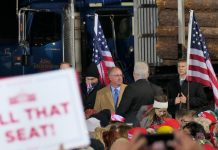 Walz on this moment: ‘I don’t think you get another chance at it’

In the courtroom and in politics, when you got nothing, you...