Good afternoon. (You can receive Daily Reformer by signing up here.)

Programming update. No newsletter Monday to celebrate the long struggle working together for better wages and working conditions!

Former intern Aviva Waldman spent the summer hangin with the youths to get their impressions of the risks of COVID-19 and, as it goes with the youngins, many are ready to take on plenty of risk so they can resume normal social activities. Though most of them will not suffer a bad case of the virus, unfortunately they can easily spread it to people who will, as Michael Osterholm notes in the piece.

We also welcome the talented Nicole Neri to the Reformer as a contributing photographer. Look for her work in the near future. Some fraternity brother threw a football at her head while she was taking photos for the story Thursday night.

Bros gotta bro. (Ed. note: a reader asked if this was justifying their behavior. Definitely not!)

I’m not into posting campaign ads but this use of animation by Lincoln Project with Trump talking is next level political campaign advertising. I’ve got to imagine they got some help from some top notch corporate ad creatives. Maybe Reformer contributor S.C. has thoughts?

And, yikes: New Trump ad touts “jobs” at a St. Paul steel mill; too bad most of the workers were laid off after a visit by VP Mike Pence: WaPost.

A Republican source tells me all the talk in the national media about Minnesota being in play is hogwash. BUT, this source is hopeful that given the opportunity to vote against Trump, suburban moderate independents and soft Republicans will split their tickets and support Republicans down the ballot because they don’t like Trump but also don’t want to buy the whole DFL agenda. Think of former Rep. Erik Paulsen and GOP lawmakers’ success in 2016.

Everyone is talking about this story by Jeffrey Goldberg in The Atlantic in which unnamed military and government sources tell him President Donald Trump is contemptuous of military service, calling men and women who died in war “losers” and “suckers.” There’s also more denigration of the late Sen. John McCain. In the most appalling anecdote, Trump apparently insisted wounded veterans including amputees not be included in his precious parades “on grounds that spectators would feel uncomfortable in the presence of amputees. ‘Nobody wants to see that,’ he said.”

All the sources are unnamed, but Goldberg says there are four of them with direct knowledge of the various insults. The Atlantic has a thorough fact checking system that makes it difficult to fabricate out of whole cloth, and Goldberg has a two-decade + reputation as a credible journalist.

Retired general and White House chief of staff John Kelly is likely one of the sources because in one incident it’s just the two of them at Arlington National Cemetery, where Kelly’s son, who was killed in Afghanistan, is buried. This is what Trump said, according to the piece:

Kelly (and the other unnamed sources) should come out and confirm the story if it’s true. It would be a sacrifice given the terror Trump and his goons would bring upon him, but it’s necessary. Now is the time.

That said, it’s entirely in Trump’s character to say these things.

See this thread for all the times he’s insulted military service members. And let’s not forget that he polluted the wall honoring fallen intelligence officers at CIA headquarters just after becoming president.

And we can imagine him being puzzled by military service because he’s rarely done anything in his life that wasn’t motivated by his own immediate, impulsive, instinctive needs — for money, sex, attention and domination. That’s who he is. It’s who he’s always been. For Trump, doing something for someone else is for suckers.

In that way, he’s the apotheosis of the repugnant glorification of the self that has emerged in the  American consciousness. You can find it in the attitudes of certain leftish corridors of the 1960s and 70s — the “Me Decade,” as Tom Wolfe coined it — and Ayn Randian capitalism that came to dominate the right.

In one man, he embodies much of what’s gone wrong in America — greed, vanity, revanchist racism, narcissism, incompetence, sloth and lust, all wrapped up into one — a nefarious but largely harmless idiot if not for his massive inheritance, his admittedly shrewd instinct for survival and the ability to mesmerize a crowd.

Compare him to the late Rep. Bernie Lieder, who died in late August at the age of 97. Here’s the PiPress when Lieder was honored at Yad Vashem, the Holocaust museum in Israel, for his service as a soldier with the 102nd Infantry Division that liberated camps. Rest in peace.

There were millions like him, and they sacrificed for us. Just as someone like the late John Lewis did for racial justice. All they ever asked is that we carry on their work.

Indulge my bat obsession: The Times has advice on what to do if a bat gets inside your home. OMG the photo.

With our mention of Girl Talk and mashups this week, a reader sent along some other fave: Xaphoon Jones – “I Wanna Know Now” (Bob Marley vs. MGMT)

I asked readers for guidance on places to go with our 3-year-old and you came through big time, so I’ll share them ahead of the long weekend.

Reades SS: Minneota State Park: Dakota for “twice fallen water” — a double waterfall, bison herd on the prairie (no petting), nice playground, cool old WPA buildings, old cemetery. When he is older, take him to the Jeffers Petroglyphs, which is one of the oldest continuously used sacred sites in the world.

Reader CH: Banning was the best — massive boulders everywhere, gorgeous scenery, nice river … and not as busy as Jay Cooke. It was really memorable for my 4 year old.

Reader JR: Franconia Sculpture Garden (near Taylors Falls), it’s a must-see with any kid probably under the age of 12. There are these giant crazy sculptures. Many are OK to climb on. Then afterward you go into Taylor’s Falls for ice cream.

Reader KH, who has written trail guides: Silverwood Park Cool sculptures set amid the compact park, easy to walk with a stroller on paved trails; Hyland Lake Park Reserve Richardson Nature Center, at the park’s north end is quite kid friendly; Wood Lake Nature Center The Visitor Center is closed but the park and trails, including the boardwalks through the marsh, are open.

My wife has had Liam this week while school’s out, and she recommends Wild River State Park on the St. Croix, where you can hike to a sandy beach and it was totally vacant on Tuesday; Cedar Lake Farm Regional Park in New Prague, which features big beautiful Cedar Lake with a fun swing, trails and fishing dock and a lotta picnic areas.

Have a great weekend all! JPC 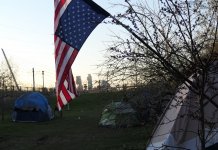 Daily Reformer: Reformers are not suckers and losers