WASHINGTON — The U.S. House convened a rare weekend session Saturday in an attempt to stop the U.S. Postal Service from disrupting mail service to sabotage the November elections, as Democrats allege.

The Democratic-led chamber passed a bill 257-150 that would infuse $25 billion into the agency as it prepares for a surge in mail-in ballots while barring it from changing operations or service levels in place at the beginning of the year.

The prohibition on service changes in the bill would remain in effect through January 2021 or for the duration of the coronavirus crisis — whichever is later.

The bill passed largely along party lines, though more than two dozen Republicans joined Democrats in backing the legislation. No Democrats voted against it. The Minnesota delegation voted party line, except for GOP Rep. Pete Stauber, who voted with the Democrats.

One Republican in favor was Rep. Brian Fitzpatrick of Pennsylvania, who said the Postal Service needed to be funded so his constituents could get their mail delivered on time. “Republicans and Democrats must come together and address the serious challenges that USPS has been facing for some time now,” he said.

Senate Majority Leader Mitch McConnell, R-Ky., is not expected to take up the measure. He told his hometown paper Tuesday that he doesn’t think a stand-alone bill funding the Postal Service would pass the chamber.

The White House threatened  Friday to veto the post office boost, calling it “an overreaction to sensationalized media reports that have made evidence-free accusations that USPS has undertaken reforms to achieve political rather than operational objectives.”

But House Speaker Nancy Pelosi, D-Calif., maintains that the administration is trying to suppress votes as the nation heads into a fraught election season in which the Postal Service will serve as “election central.”

In addition to undermining the integrity of the elections, the delays are depriving Americans of timely delivery of medicine, paychecks and other essentials, Pelosi said at a press conference Saturday.

Democratic lawmakers made similar allegations on the House floor.

The administration has mounted a “sabotage campaign” to manipulate the vote, Rep. Debbie Dingell, a Michigan Democrat, said Saturday morning.

Rep. Brenda Lawrence, D-Mich., a member of the House Oversight and Reform Committee, said the bill would prohibit the postmaster general from making any changes that would undermine the Post Office. She said the postmaster general has “tried to rip it apart from the inside” and “our democracy is hinging” on delivery of the mail.

GOP Rep. Rob Woodall of Georgia called Saturday’s vote a “punctuation mark” at the close of last week’s Democratic National Convention. This “wasteful partisan exercise” will “go nowhere” in the GOP-controlled Senate and “help no one,” he added.

The House approved $25 billion for the postal service in a $3 trillion coronavirus relief package approved in May. Pelosi pointed out Saturday that the USPS Board of Governors — a bipartisan group of members appointed by Trump— backs the funding.

Trump said last week on Fox News that he opposes some funding because he doesn’t want it used for mail-in votes, repeating his claim that it would lead to “fraudulent” election results.

Postmaster General Louis DeJoy, a top Trump donor and former logistics executive from North Carolina, has ushered in sweeping changes to the agency since taking the job in June. He acknowledged Friday at an oversight hearing in the U.S. Senate that his overhaul has coincided with a drop on-time deliveries but called allegations that they were intended to suppress votes “outrageous.”

He said changes to overtime, retail hours and the location of mail processing machines and blue mailboxes were made to save money and streamline operations but said earlier this week he would suspend some of his moves until after the elections to avoid the appearance of impropriety. He also said he wouldn’t close existing mail processing facilities and would use “standby” resources in October to meet mail surges.

On Friday, he insisted that secure elections are his “sacred duty” and top priority this fall.

But Pelosi on Saturday called DeJoy’s promise into question, pointing to his decision not to replace mail infrastructure that has already been removed. She also pointed to Trump’s comment earlier this week calling for law enforcement officers at polling places.

“It is all designed to suppress the vote,” Pelosi said.

DeJoy is slated to testify again on Monday in a hearing before the Democratic-led House Oversight and Reform Committee, where he is expected to face more withering questioning. Robert Duncan, chair of the U.S. Postal Service Board of Governors, will also appear before the committee. 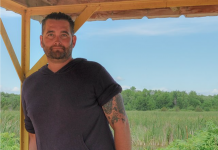