MANKATO — President Donald Trump took his stump speech to Minnesota Monday and tried to steal some of the spotlight from the Democratic National Convention, turning to his favorite technique: The belittling zinger.

He went after his tried and true favorite targets: U.S. Rep. Ilhan Omar, Speaker Nancy Pelosi, and, of course, “Sleepy Joe” Biden, who he called a puppet with “no clue.”

Long lines of supporters in cars — many with Trump flags and signs — showed up for the event, which was only made public Friday, though many were turned away and forced to watch the action from about a half mile away. A Trump volunteer said 500 tickets were dispersed.

Supporters waited and watched from nearby fields — sitting through the nearly hour-long speech and then standing on cars to take photos as Air Force One flew away.

Trump made a pit stop in Minneapolis but did not make an appearance, taking his message to the more rural and Republican 1st Congressional District. After the strongest showing in 2016 by a Republican presidential candidate in Minnesota since Ronald Reagan, Trump is eyeing the state like he once coveted New York real estate.

“I hear we’re doing very well. If we win Minnesota it is over” he said to cheers. He’s probably right about that.

His speech was full of assertions. We fact-checked a baker’s dozen and a couple more: 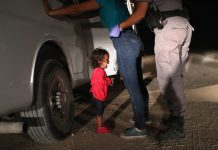