This story has been updated.

Tuesday’s primary was a night for the ascendant generation of Minnesotans, as Democratic-Farmer-Labor voters threw out four longtime incumbent state legislators in favor of upstarts.

The victories spanned across DFL power centers in the Twin Cities and Duluth, signaling an accelerating shift to a new generation of progressive activists, operatives — and now elected officials.

As if to put an exclamation point on it, U.S. Rep. Ilhan Omar — a pioneering leader of this wing of the party — beat well-funded challenger Antone Melton-Meaux by a wide margin, fueled by big turnout in voter-rich Minneapolis.

The winners — often younger and three of them people of color — were victorious in safe DFL districts, which means they are all but certain to take the oath of office for the 2021 legislative session, and in Omar’s case, her second term in Congress.

Together the incumbents carried decades of experience in the Legislature, although that may have been their ultimate undoing in a time of rapid social, economic and now political change in which DFL voters are embracing the new and novel during a time when 70% of Americans believe the country is on the wrong track.

Kendall Killian, a DFL operative and Omar’s district director, tweeted that power in the state’s largest city is moving, a shift that is both geographic and demographic:

Within Minnepolis, the political center of gravity geographically is moving away from Southwest quadrant of the city. Candidates only trying to appeal to comfortable people like themselves are going to face increasing difficulty.

The at-times dizzying pace of change can be traced back to 2016, when the Minnesota House was home to just one Black lawmaker. The DFL’s emerging activists were Black and immigrant urban dwellers who mobilized around events like the police killing of Jamar Clark in 2015.

While the city’s population grew with younger, more racially diverse progressives, the politicians representing them remained older and white.

The rise of President Donald Trump and his attacks on people of color and the insurgent politics of people like Sen. Bernie Sanders, Omar and Rep. Alexandria Ocasio-Cortez has merely ratcheted up the pressure on the party establishment to share power.

Hayden is one of two Black state senators and has been a key voice for criminal justice reform since the police killing of George Floyd, but voters ultimately chose Fateh, a 30-year old University of Minnesota business systems analyst.

Despite Hayden’s leadership, the Floyd killing likely catalyzed a desire for change, as white Democrats have forcefully moved left on racial and criminal justice issues since his death, polls show.

Minneapolis voter Justin Friedrich, for instance, told the Reformer that the Floyd protests had pushed police reform to the top of his policy priorities.

“I think it’s opened my eyes to things that I didn’t realize were necessarily problems,” he said.

Fateh tweeted his thanks to voters in south Minneapolis, where Floyd was killed.

The Twin Cities chapter of the Democratic-Socialists of America congratulated him.

Dehn won the endorsement of the Sanders’ spinoff group Our Revolution in the 2017 Minneapolis mayoral race, but ultimately lost to a candidate more attuned to the district’s emerging character.

Though the race isn’t over until certified, we do know this-thanks to the help, mentorship, time & love from a broad team, we took a bold step forward tonight. A step closer to the vision we started nearly 300 days ago-to build the most inclusive district in MN. #JusticeWins pic.twitter.com/yljWyrflh2

The case of Simonson was different; he was ideologically out of step in his increasingly progressive district, and key interest groups let DFL voters in his district know it.

“(McEwen’s) victory shows once again that northeastern Minnesotans want their elected leaders to fight to protect this special place — not sell it out to special interests,” said the Boundary Waters Action Fund in a statement, referring to Simonson’s advocacy for copper-nickel mining.

Republicans underwent a similar ideological reckoning about a decade ago, when conservative “Tea Party” challengers took out incumbents who were tagged with the dreaded word “establishment.” Despite the warnings of some Washington strategists, Republicans took control during the ensuing years of the U.S. Congress, won the White House and picked up hundreds of state legislative seats around the country.

Todd Rapp, a former DFL operative who owns a public affairs firm, noted that each of the primary winners may have been considered an underdog, but several* won their respective DFL endorsing conventions, availing themselves of the full backing of the party.

“The DFL Party has a long history of protecting their endorsed candidates, even when they are challenging incumbents,” he said. “I think the pandemic may have played to the party’s assets — great lists and a strong volunteer structure.”

Jeff Blodgett, a longtime DFL strategist who worked on Paul Wellstone’s first Senate race, said the big turnout that arose from the push to vote absentee by mail may have meant many first time primary voters without loyalty to incumbents.

Indeed, as the Star Tribune reported, more than 500,000 Minnesotans had cast their ballots by mail, dwarfing the total 2016 primary, which saw 295,000 total votes.

In the face of fears over a slow U.S. Postal Service and potential foreign election interference, the relatively smooth mechanics of the election and counting were a major win for Minnesota election administrators.

Aviva Waldman contributed to this report.

An earlier version of this story incorrectly stated each of the DFL challengers was the DFL endorsed candidate. Lesch won the DFL endorsment before losing Tuesday. 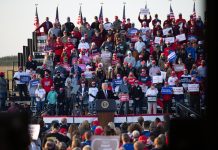 Unbeknownst to Trump during his lengthy speech in Bemidji, history pivots 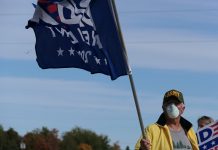 Biden in northeast Minnesota: “All Trump sees from Park Avenue is Wall Street”