Minneapolis Parks Police arrested 20 activists and residents of a homeless encampment on the east side of Powderhorn Park Monday for refusing to leave, after the park superintendent deemed the park too dangerous for habitation and gave residents 72 hours to vacate.

“Our focus was on dismantling this particular encampment because it had risen to such a level of safety issues,” said Dawn Sommers, a spokeswoman for the Minneapolis Parks and Recreation Board.

In recent weeks the encampment had become increasingly violent, with multiple reported rapes, assaults and shootings, leading many residents to move to other parks and volunteers to mostly pull out of the encampment. At one point more than 300 tents were pitched on the east side of the park — with hundreds more on the west side of the park — but by Friday the number had already dropped to 100 tents.

By the time garbage trucks and front loaders flanked by police arrived Monday, most of the people who had lived in the encampment had already moved.

The two dozen of so residents who remained packed up their belongings onto school buses rented by the state, which drove them to other parks in the city to form smaller encampments.

“Maybe next week or next month, I’ll be displaced and put somewhere else,” said Rodney Cooper, who moved to the encampment about a month ago from a former Sheraton hotel activists had turned into a shelter.

Cooper moved to the nearby Rev. Dr. Martin Luther King, Jr. Park, where about half a dozen tents were already scattered around a baseball diamond.

Of the people who were arrested, just a few were encampment residents; the others were activists who refused to move in solidarity, calling the eviction unjust.

The Park Board voted last week to limit the size of encampments to 25 tents across 20 parks in an effort to rein in their previous resolution declaring Minneapolis parks a refuge for people experiencing homelessness.

That resolution allowed for the encampments in Powderhorn Park to swell to the largest in Minnesota history. It overwhelmed park staff and volunteers working with the new Minneapolis Sanctuary Movement, which formed following the protests of the police killing of George Floyd. The unrest following Floyd’s death displaced many homeless people, who were already struggling to find shelter due to complications of the COVID-19 pandemic.

Park Board commissioners and Minneapolis Sanctuary volunteers are both quick to say they’re not capable of responding to the complex needs or so many homeless people, many of whom are dealing with multiple physical and mental illnesses.

But they say they stepped in absent a larger government response. The county and state need to organize an emergency response to the ongoing crisis of people living outside, they say.

“The one clear message that we had to every level of government and other organizations is that Powderhorn was growing too large, (but) that we would not be turning people away if they had nowhere else to go,” said Tracey Blasenheim, a PhD student who has been volunteering with the Minneapolis Sanctuary Movement since it was formed at the former Sheraton hotel half a mile away.

“No one else was providing better alternatives to Powderhorn despite all the requests of, ‘please give people housing, or at the very least, better temporary alternatives,’” Blasenheim said.

The county and state, for their part, say they have spent millions since the beginning of the COVID-19 pandemic on their homelessness response, including leasing hotel rooms for around 600 people. A group of social service professionals is also pitching building a tiny home village inside the empty Kmart nearby as an alternative to encampments.

As people loaded their belongings onto school buses and into the back of vans and pickup trucks, there was confusion about which Minneapolis parks people would be allowed to stay in.

The Park Board says it will allow encampments in 20 parks — which it will service with portable toilets and handwashing stations — but it hasn’t said which of its 180 park properties will be allowed to be refuge for encampments.

“We initially thought it would be ideal to say here are the 20 parks,” Sommers said. “And what we heard back from organizers is they don’t want us to tell them where to go, they want to choose where to go.”

That led to the creation of a permitting process, with volunteers and residents applying to form an encampment, and the park system reviewing the location based on a set of criteria laid out in the resolution. For example, encampments won’t be allowed in parks near schools or playgrounds or smaller parks where the encampment would take up more than 10% of the park.

But as of Monday, no permits had been issued, meaning some may be forced to move yet again, possibly setting off a more contentious eviction than the one at Powderhorn in which nearly everyone moved voluntarily with the help of volunteers.

“I don’t think people are going to react to (an eviction) in the same way that they did here today, where there was a lot of collaboration,” Blasenheim said.

As of Thursday, Minneapolis Parks counted encampments in more than 30 parks, though nearly all with fewer than 25 tents. Still, some will have to move in the coming weeks either because they aren’t living in permitted parks or because the encampment  they are living in is too large, like the encampment on the west side of Powderhorn Park.

At MLK Park, a woman named Meghan, who declined to give her last name, smoked a cigarette on a tarp while she waited for her belongings to arrive. She said it had become dangerous in Powderhorn, but still, she wanted to stay.

“It’s scary all over the place,” Meghan said. “When you put everybody in one park, you know, that’s what’s gonna happen.”

She and the people she lives with even planned to refuse to leave, but then decided to move. When asked if she thought it would be calmer in an encampment with just 25 tents, she was skeptical.

* A photo caption misidentified the police department making arrests at the encampment. All arrests were made by Minneapolis Parks Police. 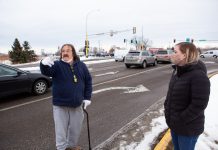