Just one Beltrami County commissioner wore a face mask at Tuesday’s board meeting, a day after the city of Bemidji passed an ordinance requiring masks in all places of public accommodation.

The ordinance excludes county, state and federal buildings, but the lack of masks on elected officials illustrates how fraught mask requirements are, even as Gov. Tim Walz plans to announced a statewide mandate on Wednesday, according to a senior member of Walz’s administration.

Commissioner Reed Olson said he wore a mask to protect his colleagues and show support for the city ordinance.

“It’s possible that I could be an asymptomatic carrier, so for the safety of my colleagues I wore a mask,” Olson said. “I also think it’s important symbolically for leaders to model good behavior.”

While Beltrami County has had relatively few cases since the beginning of the pandemic, the number of positive cases there doubled to 113 in just the past week, signaling a greater outbreak could be looming.

Masks can slow the spread of COVID-19 and are recommended by both the World Health Organization and the federal Centers for Disease Control and Prevention. But they’ve also been highly politicized since the beginning of the pandemic, which has made universal adoption impossible.

In recent weeks, Republican politicians have reversed themselves on masks. President Donald Trump, who previously mocked Joe Biden for wearing a mask, tweeted a picture of himself wearing one on Monday, writing “many people say it is Patriotic to wear a face mask.”

We are United in our effort to defeat the Invisible China Virus, and many people say that it is Patriotic to wear a face mask when you can’t socially distance. There is nobody more Patriotic than me, your favorite President! pic.twitter.com/iQOd1whktN

Texas Governor Greg Abbott began requiring masks in most counties this month even after blocking cities from enacting their own mask mandates. Twenty-eight states — with both Republican and Democratic governors — and the District of Columbia have mask requirements.

Walz has so far resisted a statewide mandate, saying he needed more buy-in from Republicans and would wait until 5% of COVID-19 tests came back positive. Minnesota’s positive test rate has hovered around 3-4% in recent weeks.

That left it to mayors and city councils to decide on requiring masks. Most of Minnesota’s largest cities have done so, including Minneapolis, St. Paul, Duluth, Rochester, Mankato and Bemidji. An analysis by the New York Times shows mask wearing is highest in Minneapolis and St. Paul and much less common in the rest of the state.

Trump’s mask endorsement could help bring along Republican elected officials and their constituents, giving Walz the political buy-in he said he needs since mask mandates are difficult to enforce.

A mask mandate would also help businesses that want to require masks but have thus far been reluctant to do so. Olson owns a restaurant in Bemidji, which requires people to wear masks when they come inside the restaurant. He said his staff has been yelled at for the rule by people who aren’t even customers.

“Our position as business owners was please pass a city-wide ordinance so we don’t have to be the bad guys,” Olson said, noting that some businesses have had to shut down because of COVID-19 outbreaks.

Commissioner Tim Sumner says he’s supportive of a mask mandate as cases have risen but forgot his own at Tuesday’s meeting.

“I was in a rush and forgot about it until I sat down,” said Sumner, a citizen of the Red Lake Nation who represents a portion of the reservation.

Sumner’s concern about Bemidji’s mandate is the possibility of being fined $1,000, which would be a severe economic burden for many of his constituents, he says.

In an email to the Reformer, Commissioner Jim Lucachick wrote, “The governor is expected to act today, we are and have been following those executive orders.”

The two other Beltrami County commissioners did not return emails asking for comment on why they chose not to wear masks. 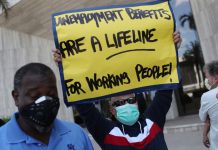 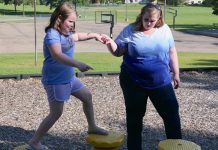 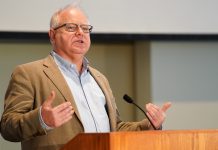 Minnesota schools can reopen if COVID-19 spread is under control, Walz says