On the evening of June 25, Michael Grunke was watching TV in his apartment on the 3600 block of Columbus Avenue — about a block and a half away from the George Floyd memorial — when he heard a series of loud bangs and glass shattering.

He called 911. While he waited for police, he went to his front room and saw a bullet hole in his window. As he was looking over the damage, about a dozen more shots rang out. Grunke dashed back into a room that wasn’t exposed to the street.

A Minneapolis Police sergeant called him back. Grunke detailed what happened. The officer said they were too busy with other calls.

Grunke found the interaction strange. In the past, when he had called about gunshots in the neighborhood, officers had been there within minutes. Had that happened in this case, it could have made a difference, he said: “If a cop would have just even pulled up in front of a building. I feel like other shots would not have happened.”

Some residents and activists say this is part of a pattern of Minneapolis Police pulling back from the area of the George Floyd Memorial to avoid confrontation, refusing to engage with perpetrators but also victims of crime.

At about 11:25 pm on July 8, dispatch relayed to officers a report of a call and shots detected near 38th and Eilliot.

An officer responded by telling dispatch that they were going to “clear off” the call.

“Unless we get a call of somebody down, that’s too close to our hot area for us to go in there,” he said.

Police spokesperson John Elder said he had “no idea” what the officer meant by “hot area” and the officer might have been using his own personal jargon. In general, he said officers are still responding to calls there like any other part of the city, but reports have to be prioritized.

“We are responding to calls in that area, and we are responding with the appropriate number of officers. We have a priority system for calls and property damage is lower on the list,” he said.

Elder did verify another trend that people at the memorial have described: Police often avoid responding directly to the area and ask the volunteer medics and community watch patrols that cover the memorial site to bring suspects or victims a few blocks away where officers can pick them up.

“If we don’t feel we have an appropriate number of officers to go into an area, we will ask for people to be brought to us. It’s rare, but it does happen,” he said.

MPD’s cautious approach to the area around the George Floyd Memorial comes amid a sharp rise in the number of shootings citywide, including in the south Minneapolis neighborhoods around the memorial. Minneapolis police recorded 162 violent crimes in the Third Precinct in June, compared with 102 for the same month last year.

For many of the community groups and organizers and residents in the area the Reformer spoke with, the current situation involves navigating a set of thorny issues. On the one hand, they are advocating for a different form of law enforcement. But on the other hand, they are also pleading with the current police force for help to address the life and death issues they face now.

For its part, the City Council is in a bruising political battle with the police, seeking to get a measure on the ballot that would eliminate the current Police Department and replace it with something else, potentially leading to widespread layoffs of officers down the road.

Andy Browne is a neighborhood resident who said in the absence of police presence, a volunteer security team and neighborhood Bloods gang members patrol and protect the neighborhood.

“They know everything that’s going on and they have a presence,” Browne said.

Browne relayed a story from a recent Friday night, when a man neighborhood residents suspected of white supremacist associations threw debris at mourners and a brick through the front door of Cup Foods — where Floyd was accused of passing a fake $20 bill before being arrested and killed.

They called the police so the man would be taken away peacefully and charged with vandalism.

Thirty minutes later, the police hadn’t arrived. They called the police dispatcher, who told them to take him a couple of blocks away, to 38th Street and Oakland Avenue, a block away from Browne’s house.

The citizens group detained him and loaded him into the back of Browne’s pickup and drove there. They waited about 15 minutes, but no police showed up.

An hour into it, they called dispatch a third time, and were told to let him go.

So the dispatcher told them to bring the man out of the area, to 39th Street and Park Avenue.

When police finally arrived, Browne expressed his frustration to the officers, one of whom he and witnesses said shoved Browne to the ground, before they sped away, some of which was caught on video and reviewed by the Reformer. The neighborhood security activists had no choice but to release the alleged white supremacist into the night.

Browne filed a complaint with the police department and shared his story on social media. And he is now suing six police officers, alleging they violated his constitutional rights with excessive use of force and retaliation.

The suit alleges the officer shoved Browne “in retaliation for his criticism of their response to the situation, and for his association with the protest movement related to the killing of George Floyd.”

Police spokesman John Elder said he cannot respond to Browne’s allegations if there is an internal investigation.

Browne said the police response was akin to a tantrum.

He’s glad he’s the one who engaged with the police officers first, because he’s white.

“I have no doubt that if one of my Black brothers would have approached them, the consequences would have been severe and everlasting,” he said.

At other times, police have even been unwilling to go near the memorial to retrieve victims of crimes. At about 12:10 am on July 11, an officer responded to a report of a person down after a shooting at 37th and Chicago by saying “They’re going to have to move that victim or we’re not going to the epicenter of that.” Later, an officer did respond to the area and reported there was no victim there.

On a recent Sunday, when police responded to a call of a pregnant woman named Leneesha Helen Columbus who had been shot near the memorial site, officers set up their staging area about a half mile away at 34th Street and Elliot Avenue.

“We’ll meet at 34th and Elliot, see if we can get the victim extracted to a closer location to us. And no lights or sirens, please,” an officer told dispatch. Columbus died.

(Zachary V. Robinson was arrested in Chicago after a warrant was issued in connection to the killing.)

In another incident on June 28 at about 12:50 a.m., dispatch told officers about a woman with a reported spinal cord injury who had been brought to the volunteer medic tent at 37th and Chicago.

The following exchange occurred over the scanner:

Dispatch: We spoke to the caller at 37th and Chicago. Per the doctor, due to a spinal cord injury, they are not going to move her.

Officer: Who is that that is not going to move her?

Dispatch: There is medical staff at the tent there.

Officer: We need to be able to have them give their patients a minimum of three to four blocks out of that area for us to respond in there.

Dispatch: Copy, we’ll call them back and see if we can come up with a plan.

Fawn Youngbear-Tibbets helps coordinate the big medic tent near the memorial and has frequently navigated police-community relations at the memorial site.

While most of the more than 150 patients she says they’ve treated had run-of-the mill issues like dizziness or being overheated, they’ve also had their fair share of serious cases. As first responders, the medics can provide CPR, but critically injured patients need to get to a hospital, and it has often been her team that brings victims in need of treatment to police and EMS.

One incident stands out, she said: A fatal shooting a block away from the memorial during Juneteenth celebrations on June 19.

Police responded to a call of a man shot a block away from the memorial at 11:25 pm. He later died. Bystanders told the police he shot himself. Elder said police have an “open and active” investigation into the incident.

Youngbear-Tibbets was part of the group that treated the victim. She tells a different story, raising questions about the police response and how aggressively they were investigating the killing.

Youngbear-Tibbets said when police arrived, they pepper sprayed community patrol guards who were trying to open the street barricade, and then pulled several of the volunteer medics away from the victim even as they were trying to stop the bleeding.

“There was so much blood, it was hard to tell where it was coming from. My medic team is scrambling and one of us is pressing on his chest. … At that point, the main thing is to make sure his heart keeps going,” she said. “And then all of a sudden we’re surrounded by cops with batons and rifles.”

She said she thought officers unnecessarily delayed the arrival of paramedics while trying to secure the scene. As for the investigation, she saw officers search the victim’s car, but she didn’t see anyone conducting forensic analysis or interviewing witnesses.

“They never talked to anyone. I’ve been told this is a no go zone. They won’t come here,” she said of police.

Youngbear-Tibbets said she hoped police would send more officers of color to the area when responding to calls, including ones trained in de-escalation.

“I’m all for abolishing the government. Let’s just be clear about that. But I agree with the need for safety and security as well,” she said. 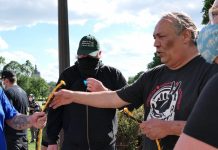