Minnesota law enforcement agencies have received more than $40 million in surplus military equipment in the past five years through a program that sends Department of Defense gear — from socks to armored vehicles — to police departments across the United States at no cost.

In Minnesota, even cities that might consider a couple of pot possession arrests in a single night a crime wave are getting in on the military hardware.

The Renville County Sheriff’s Office received two unmanned vehicles and more than 20 night-vision devices worth a combined total of $309,000 in 2019. In 2018, the department reported fewer than 80 violent and property crimes combined, according to federal data. The Chisago County Sheriff’s Office was sent an armored vehicle and 18 night-vision image intensifiers in 2016. The same year, the department reported about 110 property and violent crimes.

The previously low-profile program came under scrutiny after the 2014 unrest in Ferguson, Mo., when critics decried law enforcement’s forceful response to protesters with military hardware. Since then, agencies nationwide have received more than $850 million in equipment. The program is in the spotlight again following the police killing of George Floyd, as peaceful protestors were often on the receiving end of military-style tactics and equipment frequently seen in anti-insurgency campaigns overseas.

Under the 1033 program, established in 1997, law enforcement agencies can apply to receive surplus military gear at no cost except shipping. In 2015, former President Barack Obama issued an executive order banning the transfer of some equipment, like high-caliber weapons and grenade launchers.

Supporters point out that most of the Department of Defense equipment transferred to local agencies is mundane, like bandages and clothing. Recent studies suggest, however, that receiving military equipment is linked to higher rates of police violence, and that seeing officers with military gear like assault rifles and armored vehicles can erode community trust in law enforcement.

Policymakers on both sides of the aisle have criticized the program in the past, and the recent swell of support for police reform and defunding has amplified concerns about the possession of military-grade gear by local and state agencies. A federal bill introduced by House Democrats in early June would place limits on the program, and another House bill would eliminate it.

Here’s a look at Minnesota’s 1033 program participants and equipment, plus a searchable table to see what supplies your local police department or sheriff’s office has received since 2000.

Participation up among Minnesota law enforcement

The value of shipments to Minnesota law enforcement agencies has increased significantly in the past decade. Before 2010, police departments and sheriff’s offices across the state received no more than $232,000 worth of equipment in a year.

(Land mines are thought to be rare in Minnesota.)

Participation has increased as well, with shipments going to 51 Minnesota agencies last year, up from 35 the year before. From January to March this year, 28 departments received equipment, including police in Cottage Grove, Brooklyn Park and Woodbury.

The Minneapolis Police Department does not appear to participate.

The lengthy list of equipment sent to Minnesota law enforcement in the past five years — more than 400 different items — includes a range of gear, from clothing and office supplies to firearm parts and military vehicles.

Some Minnesota agencies receiving a windfall from the 1033 program

A handful of agencies have made the most use of the Pentagon program. In the past five years, 11 agencies have received at least $1 million worth of equipment.

Search for your police department or sheriff’s office 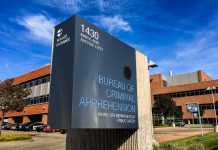