Sen. Amy Klobuchar told a cable news host Thursday that she contacted Joe Biden and took herself out of the running as his potential vice presidential nominee, calling on him to choose a women of color to fill out the Democratic ticket.

“America must seize on the moment and I truly believe — as I actually told the VP last night when I called him — that I think this is a moment to put a woman of color on that ticket,” she told MSNBC’s Lawrence O’Donnell. “And there are so many incredible, qualified women. But if you wanna heal this nation right now, my party yes, but our nation, this is a helluva way to do it.”

Thus ends Minnesota’s senior senator’s presidential ambitions for now, after a long and grueling presidential campaign that saw her fail to gain traction with Democratic voters, though she won over pundits and Biden with a dramatic exit from the race and Biden endorsement on the eve of the Super Tuesday primary contests — helping to deliver Minnesota to the Biden column.

In its earlier stages, national pundits put Klobuchar in the top tier of potential vice presidential picks. Although she is not beloved by the party’s progressive wing, she was seen as the kind of safe pick from the middle of the country who could help Biden in Midwestern states without doing too much harm.

Biden, who would be 78 when he takes office, has strongly hinted he will be a one-term president, which means his vice presidential nominee will be strongly positioned to be the Democrats’ 2024 nominee. Which means if selected, Klobuchar would have had a strong shot at becoming America’s first woman president.

Biden took to Twitter late Thursday to sing her praises.

Amy — from the moment you announced you were running for president in a snowstorm, it wasn’t hard to see you had the grit and determination to do anything you set your mind to. You know how to get things done. With your help, we’re going to beat Donald Trump. https://t.co/4kquPZtSV9

The recent police killing of George Floyd and unrest and rioting that followed drew attention to Klobuchar’s weaknesses as a candidate. She does not have strong ties to the Black and Latino base of the party, especially after an AP investigation called into question her handling of the prosecution of Myron Burrell, a young Black man who continues to proclaim his innocence in a long ago child murder.

And even as race and policing rose to the top of the national conversation, Minnesota’s national reputation on those two fronts dimmed.

Although she was the Hennepin County Attorney when Floyd’s killer Derek Chauvin was involved in another officer-involved shooting, she had already been sworn in as a senator in 2007 by the time the case was presented to a grand jury under her successor Mike Freeman.

The presidential race drew the first intense scrutiny of her political career, including damaging reports about her treatment of her staff and opacity around controversial issues. Minnesota progressives have even whispered about a potential primary campaign against her in 2024 given her unabashed centrism during the presidential campaign.

But that may be moot if Biden appoints her to a top-tier cabinet position or federal judgeship. He is currently leading in national and battleground polls.

In response to a question from the Star Tribune, “Klobuchar clarified that she reached out to Biden to ask him to pull her name from his VP list, not the other way around.”

Rep. Dean Phillips is trying to keep the faith that bipartisanship will heal America 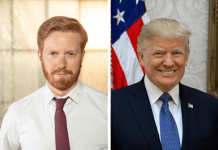 U.S. House votes to again impeach Trump, as a ‘clear and present danger’