Gloria Morales is letting people know her hair salon is back in business with a sign in front of the shop reading “Salon Open.” But the message, written on a boarded up window, is dwarfed by the spray painted phrases surrounding it: “Que Viva La Revolución!!!” and “Long Live George Floyd.”

Blocks of boarded up window fronts and eerily quiet streets are not ideal for opening day of Gloria’s Beauty Salon. Morales was ready to start cutting hair again Monday at the salon she’s owned for six years, after being closed since March 18 to help deter the spread of COVID-19. She’d been eagerly anticipating June 1, the day Gov. Tim Walz eased restrictions on stores, shops and restaurants, albeit with restrictions.

Gloria’s Beauty Salon is just off East Lake Street, which over the past week has become the epicenter of turbulent protests and then looting and arson. The protests arose after the killing of George Floyd, who died after Minneapolis Police officer Derek Chauvin put his knee on Floyd’s neck for more than eight minutes.

Even as Minnesotans are itching to bleach their roots and shed split ends, Morales’s salon opens amid the ashes and sadness of a neighborhood that was thriving as recently as a week ago.

“Now everything has changed,” Morales says. “This is very scary and we never know what will happen. We’ve had to evolve.”

As the radio plays through the hum of a blow dryer, Morales waits for the next customer. Each new person who walks through the door is welcome business, but they also bring with them the anxiety of exposure to the virus.

“At a hospital they know the people going in are sick. Here, you don’t know,” she says.

As she razors longtime customer Angel Ilvies, which she’s done regularly in six years, the two catch up in Spanish. He dictates to her the new style he wants. Unlike previous appointments, their words are muffled by the masks they’re both wearing. It’s his first trim since the onset of the coronavirus pandemic, and one of her first times cutting hair while wearing gloves, as if she’s a dentist or doctor.

“People barely made appointments before this,” Morales says, lamenting the new rules that forbid walk-ins. Health authorities can better track outbreaks this way.

This curbed reopening, dubbed “Stay Safe MN”, already called for personal care services — like hair salons — to limit the number of people in their space to 25% capacity, with a six-foot distance between customers. The capacity quota for her salon means just ten people can be in the shop at a time. Given the recent unrest, the city required her to close at 5:00 p.m., she says.

Morales applied for a federal loan through the Paycheck Protection Program, but she says she wasn’t approved. Many of the businesses on East Lake Street are owned and operated by people of color and immigrants, Morales included. A survey conducted by Global Strategy Group found that just 12% of minority-owned businesses reported receiving what they asked for through this federal government coronavirus relief effort.

Though she’s glad to be working again, Morales is still worried about the looming threat the virus poses to her, especially because cutting hair requires her to be in close contact with customers. The virus has hit people of color harder than white people.

Her daughter Kelly Morales is also nervous about her mom going back to work. Her trepidation was exacerbated by the recent turbulence and the reduction in foot traffic. “We were nervous both for our safety, and for people not coming in. A lot of people are just afraid to walk down the street,” Kelly Morales says.

But their fears — about illness and a depleted customer-pool — pale compare to their need to work.

“We haven’t had any help. We used all of our savings to pay our rent. We’re just trying to keep our business open to pay our bills,” Kelly Morales says.

Though the street is uncharacteristically quiet, neighborhood activists just outside the salon have organized a food drive for locals who need provisions after nearly a week of troubles. Tiana Rivera, an organizer, says she’ll refer people to Gloria’s. “If they need our support to spread the word we’ll do it for sure,” Rivera says.

As businesses throughout South Minneapolis have been set on fire, vandalized and looted throughout the week, Gloria’s Beauty remained untouched. Kelly Morales thinks people respect that their shop is a community pillar.

“People knew that we are the owners and a community-based business, that we are part of the minority community.” 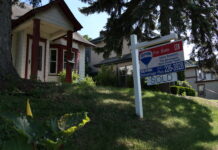 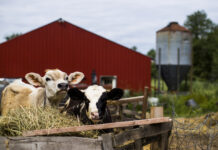 Closed for the pandemic, opening during George Floyd protests