The chaos and rage blew east Thursday, as looting and fire swept through the Midway neighborhood of Saint Paul, this time under a brilliant blue sky.

Even as fires on East Lake Street in Minneapolis smoldered and disaster tourists gawked at the rubble of stores, apartments and cars there, the looting and fires began in St. Paul.

The ostensible object of the rage was the same: The killing of George Floyd while in police custody. His final words: “I can’t breathe,” choked out to Minneapolis Police Officer Derek Chauvin, whose knee was grinding into his neck.

Though in fact the fury arose from more than just the death of one man, said Kristy Pierce.

The Saint Paul resident stood guard outside a Midway barbershop, where a sign that said it’s a black-owned business was hung in the window.

“This is the event, and I always look at behavior behind events, and this was bound to happen. When you have been oppressed for generations and generations, abused, neglected, dehumanized, you get un-human-like behavior,” said Pierce, who said she works for the St. Paul Public Schools. “Everybody matters, and this is what happens when people feel like they don’t matter.”

Police guarded the Midway Target Thursday afternoon as a growing crowd assembled in the parking lot. Some in the crowd launched shopping carts at police vehicles, and officers used chemical irritants on the group. T.J. Maxx, NAPA Auto Parts, Furniture Barn and The UPS Store were aflame hours after city officials pleaded for vandals and demonstrators to stay out of Saint Paul.

This crowd is not budging. Police have surrounded the entire store pic.twitter.com/0zAB4clkEJ

“Please stay home. Please do not come here to protest. Please keep the focus on George Floyd, on advancing our movement, and on preventing this from ever happening again,” Mayor Melvin Carter wrote in a Tweet.

Dianne Binns, president of the Saint Paul NAACP from 2016-2018, was furious when she arrived at the Midway Target to pick up medicine for her daughter and found a crowd gathered in the parking lot and police guarding the store.

“Saint Paul ain’t got shit to do with what happened,” she said. “These people (gathered here) don’t give a damn about George Floyd … Leave this shit alone.”

“What are people going to do in those communities when they need those resources?” she said. “We don’t have many stores as it is. So why are we going to burn down the small business owners who are there for us?”

The scene in downtown Minneapolis Thursday night was peaceful at first, as tens of thousands marched for racial justice — more than 70 years after a young Mayor Hubert Humphrey sounded the same call at a Democratic National Convention.

Twyana Balla was at the downtown rally with her sister-in-law, seeking justice for Floyd. Balla was ready to open a sports bar on Lake Street with her husband — a Brooklyn Center firefighter — and then COVID-19 hit. And then their restaurant got ransacked during Wednesday night’s looting. As they tried to clean up Thursday, hooligans still sought to get in the back door.

“People still coming in trying to steal the safe. There’s nothing in it. We haven’t opened yet,” she said, sounding exasperated.

And yet, despite it all, “We’re still out here,” she said.

Like Balla, other Minneapolis residents south of downtown spent the day bewildered among the aftermath of the previous night’s riots. East Lake Street, usually a vibrant business corridor, was an eerie, rubble-lined stretch Thursday as smoke and dust from overnight riots filled the air.

Divine Allah was cleaning up outside Target on Hiawatha Ave. and E. Lake St. Thursday morning because “somebody’s got to do it.”

Later in the day, community members came out to gather garbage and broken glass on East Lake. Ming-Jinn Tong, a pastor at Bethlehem Baptist Church, organized the cleanup and said he was glad to see so many neighbors helping out. On Friday, they’ll load the debris onto City of Minneapolis garbage trucks, he said.

But in some cases, what’s been lost won’t be recovered. Surveying the damage Thursday, some small business owners wondered why calls for justice had to come at the cost of their livelihoods, their dreams even.

La Poblanita on East Lake was one of the restaurants broken into and looted Wednesday night. Caesar Morales, whose family has owned the restaurant for two decades, said the riots were tragic.

“We want justice for Floyd,” Morales said. “We want people to raise their concerns but to do it in a way that doesn’t hurt the community.”

Oscar Reyes-Ocampo boarded up Mi Casa Mexican Kitchen Thursday, just two weeks after the restaurant opened. The restaurant’s doors and windows were smashed overnight, and the cash register was stolen.

Reyes-Ocampo said it was hard to explain his emotions, but he was sad, disappointed and fearful of what Thursday night might bring.

“We’ve been waiting for this project for almost a year, and then we got the surprise of COVID-19 — and then we got another surprise,” he said. “All these people want is justice, but this [destruction] is not justice.”

Nor would justice come from the government, at least on Thursday.

A press conference featuring Hennepin County Attorney Mike Freeman and officials from the FBI and Minnesota Bureau of Criminal Apprehension started nearly two hours late, with U.S. Attorney Erica MacDonald telling the press, “We thought we would have another development that I could tell you about — unfortunately, we don’t at this point.”

Neither federal nor state prosecutors announced charges for the officers involved in Floyd’s death. Officials said they’re working as quickly and thoroughly as possible, but a decision might take some time.

Thousands of people. “No justice. No peace. Prosecute the police” pic.twitter.com/ExT1YSNcGJ

In the meantime, Gov. Tim Walz called up the National Guard and sent in the State Patrol after a request from Mayor Jacob Frey.

Frey’s boyish bouyancy was missing at a Thursday news conference, in which he somberly and at times tearfully pleaded for peace.

Frey said Minneapolis would look back at Thursday as “a time where we picked up the rubble, the glass and found peace in our hearts. Not an ignorant peace, but an awakened one.”

But by the end of Thursday, the now infamous Third Precinct Heaquarters was in flames, while the sirens screamed and the helicopters buzzed overhead — all suggesting that in fact there was no guarantee of peace. 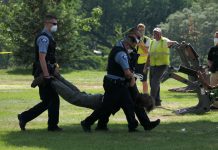