State Senator Justin Eichorn, R-Grand Rapids, deleted a tweet Tuesday featuring a video of him standing in front of tents pitched along a busy street in St. Paul to make the argument for Gov. Tim Walz to reopen campgrounds.

“As you can see behind me, we’ve got a nice little tent city set up here,” Eichorn said, addressing the governor. “If you’re okay with this, we should certainly be okay with our resorts in greater Minnesota.”

The tweet set off a parade of outraged comments leading him to delete the tweet. DFL legislators from Minneapolis and St. Paul were quick to issue a response.

Here’s the deleted video from Sen. Justin Eichorn asking the governor to reopen state campgrounds because there are homeless encampments in St. Paul pic.twitter.com/k34V9XKOam

Eichorn’s video reflects a growing angst about the stay-at-home order in northern Minnesota, a region heavily dependent on a short summer tourism season. But it also ignores the fact that homelessness is rising fastest in greater Minnesota.

Nearly 20,000 Minnesotans are estimated to be experiencing homelessness on any given night, according to the most recent study by the Wilder Foundation. Homelessness is most visible in the Twin Cities, where the largest share of homeless people live and where the state’s shelters are concentrated.

And homelessness in the Twin Cities has become particularly visible since the coronavirus led public places like libraries to close and Metro Transit to curtail its services, forcing more people to camp.

But Eichorn’s district — which includes Itasca, Beltrami, Cass and Hubbard counties — is also dealing with its own housing shortage, though homelessness is less visible because people couch-hop and camp out-of-sight from passing traffic.

A lack of housing is particularly severe on reservations, including Leech Lake and Red Lake, which Eichorn represents.

The housing shortage and resulting overcrowding has exacerbated the coronavirus pandemic in both urban neighborhoods and rural areas, like Nobles county.

To limit the risk of an outbreak in crowded shelters, Hennepin County has moved hundreds of homeless seniors and those with underlying medical conditions into hotel rooms to limit their risk of becoming infected. Ramsey County also purchased a building for the most vulnerable people to move out of crowded shelters.

Resorts and state campgrounds are closed until at least May 18 under the governor’s stay-at-home order, in order to discourage non-essential travel. That led several county boards in northern Minnesota to pass resolutions in April calling on the governor to end his stay at home order, including Hubbard county in Eichorn’s district.

“I’m so disappointed to see the Boundary Waters in northern Minnesota shut down for camping and all of our beautiful places we have to go up there,” Eichorn said in his video, offering passing sympathy to the people in the tents behind him. “And it’s also unfortunate this is how our homeless people have to live right now.”

That encampment Eichorn stood in front of in his video may also be broken up by local law enforcement since Walz issued an executive order allowing it on April 29.

Walz’s stay-at-home order initially did block local authorities from breaking up homeless encampments, in accordance with guidance from the Centers for Disease Control and Prevention, because it would exacerbate the public health crisis by dispersing people throughout cities and breaking their connections with outreach workers.

As encampments grew in Minneapolis and St. Paul without the necessary toilets, hand-washing stations and social distancing necessary to keeping them safe, Walz reversed himself in late April and issued an executive order allowing law enforcement to clear encampments if they pose health and safety risks. No encampments have been cleared yet.

Pushback against ‘vaccine passports’ puts colleges in a quandary 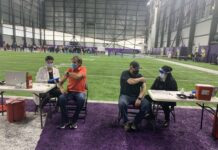 High demand for COVID-19 vaccine eases fear of hesitancy, but resistance among Republicans, other groups remain 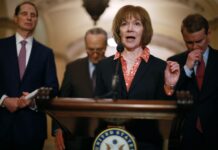 Special Report: Dozens of members of Congress are vaccinated against COVID-19, but some still hesitant

State Senator says campgrounds should reopen because there are homeless encampments

by Max Nesterak, Minnesota Reformer
May 6, 2020

ABOUT US
The Minnesota Reformer is an independent, nonprofit news organization dedicated to keeping Minnesotans informed and unearthing stories other outlets can’t or won’t tell. We’re in the halls of government tracking what elected officials are up to — and monitoring the powerful forces trying to influence them. But we’re also on the streets, at the bars and parks, on farms and in warehouses, telling you stories of the people being affected by the actions of government and big business. And we’re free. No ads. No paywall.
Contact us: [email protected]r.com
FOLLOW US
© Minnesota Reformer 2021
MORE STORIES