While the Walz administration, public health workers at all levels and level-headed Minnesotans work together to flatten the curve of the novel coronavirus, other North Star state residents occupy themselves by spreading misinformation and conspiracy theories.

Some of this activity might be a way to explain the pandemic and its effects — and by explaining it, control the out-of-control. Or they could simply have weak critical thinking skills.

The New York Times article on why and how conspiracy theories flourish and why it matters is a helpful explainer. Unfortunately, though unsurprisingly, some of these inane ideas have taken root among my former neighbors in Minnesota.

Where to begin? We’ll stick to material shared by those on the edges of Minnesota’s right wing  social media ecosystem. Their takes on “globalist” plots to take over the world is a good place to begin.

The involvement of Microsoft billionaire Bill Gates in public health via the Bill and Melinda Gates Foundation has spawned more conspiracy theories than a Windows operating system can attract computer viruses. A sampling of social media shared by right wing activists ranges from accounts of massive globalist conspiracies to take over the world to claims that people will be implanted with a “global ID” that would be comparable to the tattooed numbers of Holocaust victims.

The president’s advisers, Drs. Fauci and Birx, have been exposed as frauds and must no longer be allowed to dictate policy. They convinced the president to make bad decisions based on faulty science and speculative computer models stocked with false assumptions. They are up to their necks in conflicts of interest, mostly having to do with the Bill and Melinda Gates Foundation and its many global partners pushing mandatory vaccines and a global ID system that can be used for tracking individual Americans. . . .

Those experts on the Trump coronavirus team? Minions of the globalists. George Soros, the Jewish bugbear of the right, is in the mix, along with “creepy NGOs like the Rockefeller Foundation and the World Economic Forum.”

There are pictures, so they must have been plotting something.

Some in the Alternative Media are beginning to use the term “Plandemic” instead of “Pandemic” as there is clear evidence that the events unfolding today over the Coronavirus scare have been planned for some time, even before the breakout in Wuhan China late last year.

Federal Reserve Bank of St. Louis President James Bullard told Bloomberg News recently that unemployment could reach 30%, and admits that the shut down of the U.S. economy is something that has been planned.

Health Impact News reported back in January of 2020 how Event 201, hosted by the Johns Hopkins Center for Health Security in partnership with the World Economic Forum and the Bill and Melinda Gates Foundation, ran a 5-hour simulation on the Coronavirus pandemic, six weeks before the first outbreak in Wuhan China. . . .

“You know, with Agenda 2030 and then you got Bill Gates and [Anthony] Fauci and [Deborah] Birx all in on it and this whole nefarious agenda.”

Watch video of the interview here.

Don’t be fooled. Bill Gates is a globalist. He is a bad player.

Needless to say, the material has been debunked. In early April, Media Matters’ Alex Kaplan looked at how the Bill Gates coronavirus conspiracy theory spread on social media and then to a Fox News host:

A conspiracy theory about Microsoft founder Bill Gates and a potential vaccine for the novel coronavirus has been circulating for weeks on social media platforms, getting high engagement numbers, and has since been pushed by both Fox News host Laura Ingraham and a Newsmax correspondent.

As the coronavirus pandemic has spread throughout the United States, Gates, who runs an organization that focuses on public health worldwide and has warned of the threat of epidemics for years, has been leading efforts to and spoken out about finding a vaccine. That has included spending billions of dollars to find a cure via his foundation and doing interviews on shows including Fox News Sunday and The Daily Show about the need for a vaccine.

A review by Media Matters found that the conspiracy theory first seemed to gain traction around March 17, when a YouTube video about the virus mischaracterized Gates’ work to develop trackable vaccine data as “implanting everybody with a global ID” and compared it to tattoos on Holocaust victims. The video received more than 120,000 views. On that same day, conspiracy theory outlet Infowars published a piece and video of an Infowars host suggesting Gates was using the situation to “reduce the world’s population,” citing the invisible ink, and tied it to claiming the government would give out a “color-coded wristband that will be used for traveling Americans during an impending COVID-19 lockdown.” The Infowars article subsequently spread in Facebook groups and showed up as a meme on Instagram.

Media Matters published a guide to right-wing media reactions and conspiracy theories surrounding coronavirus in late February, and not surprisingly, these tropes show up in Minnesota’s right wing social media circles. Media Matters noted “Some right-wing conservative Christians have used major global crises, including pandemics, to fearmonger about the end of the world.”

While Shahram and the Minnesotans who love him might have seen the pandemic as the harbinger of the Second Coming, others thought it was nothing worse than the flu and shared expert opinion on that. Redwood County Republican activist Roger Baumann shared Dr. Drew Pinsky’s Youtube ridiculing the media on February 28: 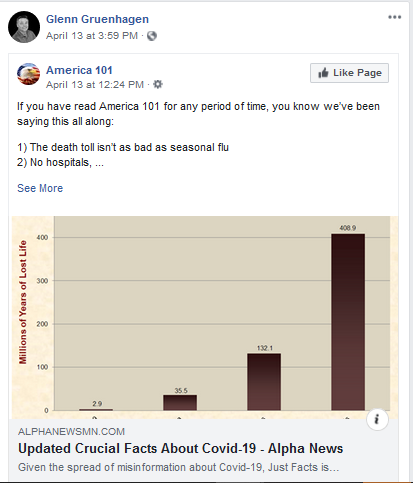 Where did the novel coronavirus come from? A Chinese lab! Either as a bioweapon or an attempt to show those dirty capitalists in the United States who’s the boss of the science world.

It’s all fun and games until this stuff winds up in the brain of a congressman, and Minnesota Rep. Jim Hagedorn is impressed by the newer born-in-a-Chinese lab theory. As I reported on Bluestem Prairie, an April 20 email from Hagedorn’s campaign shared under the subject head “A Chinese Coverup?” centers around his response to a Fox News report speculating about whether the coronavirus originated in Wuhan lab as part of China’s efforts to compete with US:

Fox News and other media sources are reporting that U.S. officials are investigating that COVID-19 may have originated from a communist Chinese Wuhan bio lab. If true, it makes China’s coverup and delay to provide information about the dangerous nature and person-to-person spread of the virus all the more damning….

China’s irresponsible handling of this matter has led to enormous loss of life and economic devastation in the United States and around the world. The communists must be held accountable, financially and otherwise.

“If true” is doing a lot of work in Hagedorn’s first paragraph. As it happens, the Times reported Thursday that “scientists who have studied the genetics of the coronavirus say that the overwhelming probability is that it leapt from animal to human in a nonlaboratory setting, as was the case with H.I.V., Ebola and SARS.” That same Times piece also says intel agencies are being pressured by the Trump White House to hunt for the link.

We’ll end with the popular notion that the pandemic is just a continuation of the impeachment of President Trump by other means.

Action 4 Liberty, an outgrowth of the Tea Party movement whose PAC has received contributions from conservative moneybags Robert Cummins, shared a common theme: that the pandemic is a plot to defeat President Trump in November’s election.

That the shared cartoon was posted on the Facebook page of Alpha News, another Cummins-sponsored entity, seems natural in the paranoid style of this ecosphere. The right is under the gun and the Evil Donkeys have invented an international pandemic.

A graduate of Hamline University and the University of Arkansas creative writing program, Sally Jo Sorensen has run the rural politics blog Bluestem Prairie since 2006. She now lives in Summit, South Dakota, where she is free to liberate her inner Darlene as these times demand.