With no money or jobs, renters refuse to pay

Vanessa Del Campo Chacon sits on her front stoop with her then-three-year-old daughter, Regina, in April 2020. About three dozen families in south Minneapolis gained ownership of their five apartment buildings in 2020 in a cooperative arrangement after spending years battling with their landlord, Stephen Frenz. Photo by Max Nesterak/Minnesota Reformer.

Vanessa Del Campo Chacon and her husband struggled to make ends meet even before COVID-19 stole their jobs.

Between their two incomes, they were able to pay $1,000 a month in rent and utilities for their one-bedroom apartment in south Minneapolis, plus send money to their son in Mexico, where the couple moved from in 2015.

“With what I was making, I didn’t really have much to save,” Del Campo Chacon said in Spanish through an interpreter.

When schools closed in mid-March, people stopped needing Del Campo Chacon’s child care. Then, when the stay-at-home order shut down large sections of the economy, Romero Hernandez’s hours were cut.

With little savings on April 1, Del Campo Chacon and 38 other families renting from the same landlord said they would not be paying rent for the foreseeable future.

They’re nearly all immigrants — from Mexico, El Salvador, Guatemala and Eritrea — who’ve seen their jobs in restaurants, hotels, auto shops and hair salons wiped out in just a few weeks.

Many work in the underground economy and won’t be eligible for the $2.2 trillion federal relief package. So they’ve formed a mutual aid network, to pool their limited resources and collect donations to help one another.

“We have nothing. We have no resources. And we’re getting no support right now,” Del Campo Chacon said. “We decided to choose the survival of our community over rent.”

Their refusal to pay during the crisis is driven by necessity, but they’re also using this moment — when so many people across the country suddenly lost their incomes — to organize for a radical housing policy: “cancel rent.”

Del Campo Chacon is a member of the Minneapolis tenants rights group, Inquilinxs Unidxs Por Justicia (United Renters for Justice.) They’re one of dozens of progressive organizations in Minnesota and nationwide — including labor unions and faith groups — who are pushing for short-term suspension of rent and mortgage payments.

On Wednesday, dozens of cars and bicycles circled the U.S. Bank plaza in downtown Minneapolis with horns and music blaring. It allowed people to hold a protest while still maintaining social distancing.

There wasn’t much traffic to block in the largely deserted downtown, but one driver yelled out his window, “Get a job.”

More than 350,000 Minnesotans — 11% of the state’s labor force — have applied for unemployment in the past three weeks, a number that far surpasses all the claims filed in 2019. People of color, who dominate the low-wage service jobs that have disappeared in just a few weeks, have been especially hard hit, with one in five in Minnesota applying for unemployment, according to the state’s Department of Employment and Economic Development.

Minneapolis City Council Member Jeremiah Ellison and 22 other local leaders from across the state sent a letter to Gov. Tim Walz Monday asking them to support a state or federal suspension of rent and mortgages until the health emergency is over. 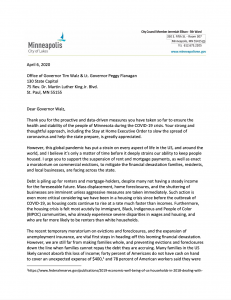 “If at the end of this crisis, more people are facing homelessness and people who own the buildings, their buildings are going into foreclosure, I don’t know who that serves,” Ellison said in an interview.

A spokesman for the governor said his office is reviewing the proposal “and will continue to communicate with local partners while making tough decisions.”

Minneapolis City Council Member Lisa Goodman was among the five council members who did not sign the letter.* In a reply to a constituent, she explained that she supports increasing rental assistance to those affected by COVID-19 but thinks suspending rent is not legally or politically feasible and would set off a cascade of negative consequences.

“Taxes wouldn’t be paid, utilities like water, sewer, garbage etc couldn’t be paid and employees of the building management wouldn’t get paid and more people would be unemployed,” Goodman wrote. “I’ll also mention it doesn’t target those in need, there are many folks out there still employed and can pay rent.”

Goodman said she’s heard from several property owners of affordable housing who have seen their revenue drop dramatically this month. One property owner told her he only received rent from 20% of tenants in one of his seven buildings.

“Writing a letter doesn’t do anything. It would be a better use of their energy to urge the governor to fund more rental assistance,” Goodman said in an interview.

The National Multifamily Housing Council estimates 31% of renters didn’t pay rent on April 1, up from 19% this time last year.

Walz was quick to issue a moratorium on evictions and foreclosure enforcements, even without a plan for what happens when the peacetime emergency ends.

“Having a stable home is going to be critical. There will be a time to clean this up after it’s done,” Walz said at the time.

In the past few weeks, around 20 other states and the District of Columbia have enacted similar moratoriums, according to the National Consumer Law Center.

The executive order was a lifeline for the state’s more than 600,000 rental households, 44% of whom spend more than one-third of their income on rent.

But the moratorium on evictions doesn’t eliminate renters’ monthly obligation, which has renters digging into their savings accounts, or working out payment plans with landlords. Some are simply not paying and accruing rental debt, which means the courts could see a tidal wave of eviction orders when the state’s peacetime emergency ends and the moratorium lifts.

For jobless homeowners and landlords who rely on rent to pay mortgages, an aftershock of foreclosures could be close behind.

One proposal being considered in the Legislature to clean up the economic fallout is a $100 million housing assistance program for low-income people, which has bipartisan support. Lawmakers are nowhere near a final agreement, however, and Republicans are unlikely to agree to such a high figure during a worsening state budget outlook.

Minneapolis Mayor Jacob Frey recently set aside $3 million for emergency rental assistance for residents regardless of their immigration status, which he acknowledges will help only a fraction of the people in need.

Some progressive housing activists say expanding rental assistance and the eviction moratorium are not enough.

“There was already a crisis with regards to housing,” said Margaret Kaplan, president of the Housing Justice Center. “Any dollar amount that you put into rental assistance will get used. In the end, this crisis isn’t about what happens in the next 60 days. It’s a question about what happens to so many people when jobs don’t come back, or they don’t come back in the same way.”

Kaplan was recruited by community organizations to develop the legal framework to create a rent and mortgage moratorium.

It’s a complicated task because there’s never been a universal suspension of housing payments before. Kaplan is looking at who could enact it, either at the state or local level, and in which branch of government, executive or legislative.

“A lot of things that are possible if you have the political will to explore them,” Kaplan said. “And we cannot have the burden of the current crisis falling on the people who lost their jobs through absolutely no fault of their own.”

New York could be developing a model for other states to follow. State Sen. Mike Gianaris, of Queens, introduced legislation that would forgive three months of rent and mortgage payments for people and businesses affected by COVID-19.

Executive orders and legislation would likely face legal challenges from landlords or banks — or both. It could also threaten cash-strapped local governments dependent on property taxes.

Cecil Smith, the president of the Minnesota Multi Housing Association, a group representing thousands of landlords in the state, declined to comment or say how many of his members reported they have tenants who missed rent this month.

A private Facebook group called Minnesota Rent Strike sprung up on March 17 — the day Walz issued an executive order closing bars, restaurants and gyms. The group now has around 2,250 members who share petitions and advice and correspondence from their landlords.

Amanda Gomand, a member of the group, paid rent in April but doesn’t know how she’ll make rent in May or June. She lost her job as a bartender at a bowling alley in Minneapolis when the stay-at-home order was announced.

“I tried to negotiate with my landlord some kind of reduced payment, and they were willing to do a payment plan,” Gomand said. “But I didn’t see how that would actually help the situation because that money is still going to be owed, so I just paid.”

Gomand is getting about $300 a week in unemployment, enough to cover her rent of about $750. But when she adds in her student loan payments and cost of health care, there’s not much left over for anything else.

The federal government’s $2.2 trillion relief package provides expanded unemployment of $600 per week for four months and $1,200 to most taxpayers earning less than $75,000 a year.

That influx of cash will help people pay rent for several months, but it’s unclear when people will actually receive the money, especially if the IRS doesn’t have their banking information. The growing patchwork of local, state and federal funding will be weeks or months behind the need, and surely won’t reach everyone.

Del Campo Chacon and her neighbors will likely be evicted when the peacetime emergency is lifted.

It’s a familiar situation for them. They’ve been in a yearslong battle with their landlord Stephen Frenz, who was banned from holding rental licenses in Minneapolis for five years because of poor housing conditions, fraud and pest infestations. Frenz served some time in the Hennepin County workhouse for perjury related to the case and paid out a record-setting $18.5 million settlement to his tenants. Del Campo Chacon received $4,000.

Del Campo Chacon and her neighbors had been paying rent since a court-appointed administrator took control of the buildings last year. Withholding rent gives Frenz more ammunition to evict them once the governor’s peacetime emergency ends and the moratorium on evictions is lifted.

“We are aware that the long-term risk is that we will go up against yet another eviction,” Del Campo Chacon said. “But because this has to do with the safety and survival of our community, that’s the risk that we’re willing to take.”

With no money or jobs, renters refuse to pay