The multi-billion dollar package aims to slow the spread of COVID-19, the disease caused by a new coronavirus, and mitigate its economic effects as fears of recession loom.

The bill — the Families First Coronavirus Response Act — passed 363-40, with overwhelming bipartisan support. The 40 votes against the bill were all Republicans, including U.S. Rep. Tom Emmer, who represents Minnesota’s 6th District. The House’s only independent lawmaker, Michigan Rep. Justin Amash, voted “present” on the bill. Another 26 lawmakers did not vote.

Passage came hours after President Donald Trump declared a national emergency over the pandemic, freeing up as much as $50 billion to help the country weather the pandemic and waiving restrictions on health providers and facilities.

The House bill would provide free access to tests for the virus, including for those without health insurance. It would also give workers affected by the virus paid family and sick leave, boost unemployment benefits, strengthen government food programs for children, older people and those with low incomes and help states meet expenses for Medicaid, the government insurance program for the poor.

“The three most important parts of this bill are testing, testing, testing,” House Speaker Nancy Pelosi (D-Calif.) said in a news conference ahead of the vote. “We can only defeat this outbreak if we have an accurate determination of its scale and scope so that we can pursue the precise, science-based response that is necessary.”

Pelosi was engaged in intense negotiations over the bill with Treasury Secretary Steven Mnuchin and congressional Republicans ahead of the vote. Trump tweeted his support for the measure ahead of its passage.

“I fully support H.R. 6201: Families First CoronaVirus Response Act,” he wrote. “I encourage all Republicans and Democrats to come together and VOTE YES! … Look forward to signing the final Bill, ASAP!”

The legislation will now move to the Senate, which is expected to take it up next week.

McConnell said Thursday the package Pelosi introduced earlier this week didn’t not meet that standard, calling it “an ideological wish list” on the Senate floor.

But he signaled in a statement Saturday that Senate passage of the final bill was likely. “Of course, Senators will need to carefully review the version just passed by the House. But I believe the vast majority of Senators in both parties will agree we should act swiftly to secure relief for American workers, families, and small businesses,” McConnell said.

In a letter sent Thursday to members of the House, Pelosi urged quick congressional action as schools and businesses shut down and shifted online to slow the spread of the virus.

“Time is of the essence,” she wrote. “During this time of crisis, the strong and steady leadership of our members working together is urgently needed.”

On Friday, CDC’s website cited 1,629 confirmed and presumptive positive coronavirus cases in the United States, and 41 deaths caused by the virus. The CDC reported that COVID-19 had been reported in 46 states and Washington, D.C.

Trump signed an $8.3 billion spending package last week to combat the virus, and Pelosi said the House is poised to take up a third emergency response bill soon. Also last week, House lawmakers rebuffed a Trump administration request to cut funding for the Centers for Disease Control and Prevention amid the coronavirus crisis. 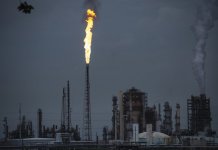