Minnesota Secretary of State Steve Simon is gearing up for another battle for a second batch of federal elections security funding.

After a months-long feud with Senate Republicans in 2019, Simon’s office persuaded the Legislature to spend money that unlocked $6.6 million in federal funding last year. He quickly hired a new “cyber navigator” — Bill Ekblad, a former U.S. Navy cryptologist who later worked for a U.S. intelligence agency.

Simon, a former DFL lawmaker, is engaged on a number of fronts at the Capitol this year. He began the session with a bipartisan push by lawmakers to protect the data of voters in the upcoming presidential primary. Some Minnesotans are concerned that their party identification will be known to all four major parties in Minnesota, following the state’s move to a presidential primary.

But Simon and Ekblad are also working to ensure Minnesota counties are prepared for any other potential election sabotage. U.S. intelligence officials recently briefed some members of Congress that Russia is continuing to meddle in the country’s elections ahead of November, intending to support President Donald Trump’s re-election, a move decried by Trump as a hoax.

Simon and Ekblad spoke to the Reformer about elections security in a recent interview. The following is edited and condensed for clarity.

Following the 2016 election, which saw meddling by Russians, as well as recent technology problems plaguing the Iowa caucuses, there’s some trepidation about elections security. What is Minnesota doing to secure its elections and how is it spending the federal funding secured last year to safeguard the state’s voting systems?

Simon: In 2016, Minnesota was one of the states targeted by a foreign government — that’s the unanimous conclusion of all the intelligence agencies. You can divide the whole elections administration world as pre-2016 and post-2016. It was that pivotal of an event. Congress stepped up with that first pot of money, and we’ve gone to work as quickly as possible, though belatedly, to do things like hire (Ekblad) as our cyber navigator. The idea is to have someone housed in the Secretary of State’s office who will work with our teammates — and it is a team sport — in putting on elections, those who actually count the balance and those who actually hire and train the election judges and program the equipment at the counties and at the city level.  We are only as good as our weakest link, and so no jurisdiction is too small for us to care about because a savvy adversary will exploit whatever way it can to wreak havoc.

Ekblad: Part of what I’m able to do is create those relationships at the county level between the election officials and the IT officials. You’d think that they would know each other, and in a lot of cases they do, but I’ve already found examples where me knocking on the door generates both of them coming to a room and learning on the fly what the systems are, what the priorities are. So having that dialogue is a key part of what I’m able to help make possible. Also, to get them to know each other across county lines, across the state so the large, well-funded counties in the metro area are in a common forum with the smaller counties who maybe don’t have access to the expertise so they can share ideas and share challenges and solutions towards toward securing the systems that they’re responsible for.

What exactly is a Navy cryptologist?

Ekblad: The roots of cryptology was really about encrypting and decrypting messages, keeping information safe and trying to take advantages of gaps and vulnerabilities in adversaries’ information so that you can turn that into intelligence that commanders can use. That’s how I spent much of my first two-thirds of my career in the intelligence lane. About 2010, Navy cryptology took a little bit of a turn to become the Navy’s source of expertise for cyber-related things. I was identified to stand up a cyber-intelligence cell in Europe and was able to do a lot of learning about what all was involved there, and I’ve been involved in different aspects of Department of Defense cyberspace operations.

What is the biggest priority to achieve ahead of the upcoming election?

Ekblad: Our best means to make rapid progress is in that collaborative space. So I’m not going to be able to go to 87 counties and identify a system they need or a technical gap they can’t solve. If they bring them to me, I’m happy to help solve them. But what I can do is make sure that they are all on the same page and viewing this as a collective security challenge. If you look back at 2016, it was kind of unfathomable that you’d have a foreign adversary attempting to hack into election systems. Then in 2018, it was this different tack about influence: Using social media to hack the brain of the voter, some of these types of concepts where it wasn’t about hard computer network operations, it was about the soft space of influence. We’ve spent a lot of time in the past two years thinking about how to make people smarter about being manipulated. We didn’t really see either of those two punches coming. When you look at 2020, I just don’t have confidence that we can predict what’s going to happen. The way I’ve approached this challenge is to say, ‘Okay, counties and locals, there are things we need to make sure we do to get ready for those last two things that we now understand better, so you need to make sure you’re patched, you need to be working with your communications teams to make sure you’re prepared to deal with social media stuff.’ That’s what I want to have them prepared for.

How do you ensure the integrity of elections? What are the challenges when you consider the soft influence of social media and combatting disinformation?

Simon: This is job one. What’s difficult from the standpoint of our offices is, we aren’t the “Election Content Police.” And it wouldn’t be appropriate for us to seem to take sides by swatting away or drawing attention to false claims that come from this or that political party or this or that end of the political spectrum, except as it regards the function of elections. So if someone gives false information about the election process, absolutely we are and we will continue to be vigilant and aggressive about that. But if someone says ‘Candidate X is a crook’ or ‘Candidate Y is corrupt’ or manufactures something that just isn’t true — for example, in the fall of 2016, something spread like wildfire on social media platforms saying that the Pope had endorsed one of the candidates for U.S. president. That’s absurd. But is it the role of our office, to say, ‘This candidate or campaign said something that was false’?. That’s a collective responsibility of all of us.

Is your job harder when you have a president who sometimes undermines the findings of the intelligence community or, tries to downplay the role that Russia had in the elections in 2016?

Simon: I had a particularly surreal experience in the summer of 2018 of having gone to our twice-yearly meeting with all the secretaries of state in Philadelphia. That particular meeting in the summer of 2018 had been filled with closed-door briefings by intelligence folks from the Trump administration. On Monday morning, after I returned on Sunday night, was the now infamous side-by-side Putin-Trump press conference in Helsinki, where the President apparently said — and I’m paraphrasing — ‘I take him at his word. He says he didn’t do it.’ To have that disconnect, where the commander-in-chief seemed to undermine — at least in part — what we had just heard from his own people for three days. That was frustrating but the good news is — I have to give credit where it’s due — the intelligence authorities have been a good and reliable partner after a rocky start.

How will this session go for the second request for the state match to free up additional federal dollars?

Simon: It’s pushing that boulder up the hill again. After a 15-month delay last time, we hope there won’t be any game playing this time. This time, it’s more money, but it’s also a much higher state match. Last time, it was $6.6 million and a required match of 5%, which was only $330,000. This time, it’s $7.4 million and the required match is just shy of a million and a half. From the legislative standpoint, it’s not just a couple hundred thousand dollars. Now we’re asking for a little bit more. 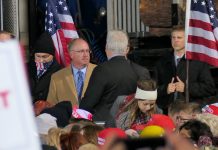 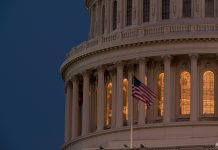