MARSHALL, LYON COUNTY — Angela Larson was startled to see in her local paper in January that Lyon County commissioners would decide the following day whether new refugees could be resettled there.

As director of family services for United Community Action Partnership for almost 15 years, Larson has helped refugee families establish residence in Lyon and Nobles Counties. She never imagined a federal mandate asking counties to give permission for something they’d been doing for decades.

“I guess I was naive. I grew up here. It was homogenous but over the years became more diverse,” she said. “We decided to raise our family here because of that diversity. When my son went to school, he had friends named Mifta, Adul Fata, Jose. It was beautiful to me.”

But as Larson soon learned, resentment of refugees and immigrants was simmering in the region.

An executive order signed by President Donald Trump in September required states and local governments to consent in writing to refugee resettlement in their jurisdictions.

That order was stayed by a federal district court Jan. 15. The decision is under appeal. The White House released a statement saying, “Another lawless district court has asserted its own preferred immigration policy in place of the laws of the United States — and, in so doing, robbed millions of American citizens of their voice and their say in a vital issue directly affecting their communities.”

In the meantime, Gov. Tim Walz and more than 20 other Minnesota counties have already voted to let new refugees in.

Redwood, Pipestone, Murray and Nobles Counties — all near Lyon in the rural southwest part of the state — had voted to accept refugees by early January.

Beltrami County in north central Minnesota was the first county in the state and second in the nation to reject new refugees. That ban became moot after the court injunction, but relations between residents who welcomed refugees and their opponents remained fraught.

Larson didn’t think Lyon County residents would be concerned. Only 93 refugees had been resettled there in the past decade, though it was already home to Hmong families escaping the Vietnam War and Somalis fleeing ethnic-cleansing and civil war. Since 2014, refugees from Myanmar — formerly known as Burma — have settled in Lyon County, many finding jobs at Turkey Valley poultry processing plant.

When Larson arrived at the Jan. 7 meeting, she found a crowd furious about not only refugees, but other immigrants, too.

As in Beltrami County, things got ugly fast.

“They were saying horrible things about refugee people,” said Lyon County Commission Board Chair Gary Crowley. “But they didn’t have correct information. They seemed mixed up about the difference between refugees and immigrants. I bet there’s a lot of people who wouldn’t even know it if nine refugees came to Lyon county last year.”

Board member Charlie Sanow was equally dismayed. “This was purely politically,” he said. “It’s to please Trump’s base. He wants to get people fighting and have them place credit and blame.”

Sanow said refugees undergo thorough vetting, and that most are employed within 60 days — a godsend for local companies badly in need of labor. “They support the local economy, they have jobs, they attend district schools. We need that student population,” he said.

Samira Sheikh is a case manager now, but she used to be one of those students. She came to Marshall from Somalia as a child after years in a refugee camp in Kenya. She attended public schools and Southwest Minnesota State University in Marshall, or SMSU, working as a translator before becoming a resettlement case manager.

“This is my awesome beautiful community that I love,” she said. “I didn’t realize there was so much opposition. I was hurt not by what they said, but that I told my story, the heartache my family went through. And they didn’t care.”

The atmosphere at the meeting became so volatile, with shouting, booing and insults, that commissioners delayed the vote on resettlement and set a public hearing for two weeks later. They cancelled the hearing after the injunction and considered the matter settled.

That’s when the community mobilized, as grassroots activists organized a campaign that would make a simple statement about Lyon County: All people are welcome here, no matter creed, color or country of origin.

Darwin Dyce of Ghent, the ad hoc leader of a loosely organized group called Marshall Area Peace Seekers, said they called and wrote commissioners to insist that the public forum go on so they could support refugees. “When I spoke to our refugee folks, they were afraid. We couldn’t just sweep this under the rug. We needed to talk,” he said.

Commissioners received dozens of calls, emails and letters supporting refugees. “They were 80 percent for refugee resettlement and 20 percent against,” Crowley said. “Before the first meeting we’d heard mostly objections. After that almost everyone was positive and even emotional. One woman was so upset that she was crying on the phone.”

The day of the hearing, Jan. 28, Crowley called county staff for more chairs.

More than 200 people from a county of 25,800 squeezed into the basement meeting room of the Lyon County Law Enforcement Center in Marshall. Those who couldn’t find seats leaned against walls or sat on the floor.

The audience was diverse: White residents of the county; refugees and their U.S. born children; naturalized citizens and Native Americans. A small contingent from nearby Redwood County showed up, angry their own commissioners said yes to refugees and hoping to prevent approval next door.

They were outnumbered.  Teachers from Marshall Public Schools and the SMSU Faculty Association read statements in support of resettlement. The manager of the local HyVee grocery store said refugees worked and shopped there. A farmer asked what the community could do to help.

Marshall Middle School Assistant Principal Peter Thor, a Hmong resident who put in four years at the poultry plant before becoming a school administrator, broke into tears as he described his love for the Lyon County region. “A lot of people in this room are why I am here today,” he said to loud applause.

Redwood Falls resident Roger Baumann acknowledged that he didn’t live in Lyon County. He said he did not object to refugee resettlement through churches or charities, but not with tax money. He pulled a pamphlet copy of the U.S. Constitution from his shirt pocket and said “There’s nothing in there that talks about benevolence.”

(The fears of government largesse are unfounded, according to a study from Trump’s own Department of Health and Human Services that reported refugees actually contributed $63 billion more in revenue to federal, state and local governments than they cost over the decade surveyed. They tend to work and pay taxes.)

The audience grew quiet when a Karen woman who had escaped Myanmar at age three came to the microphone. She recounted watching her village burn before fleeing with 100 others to a refugee camp on the Thai border. During their escape, the group had been forced to choose between the larger group and a crying baby. She sobbed as she said they had left the infant behind.

Commissioner Steve Ritter said the testimony had a powerful effect. “I was initially opposed before 6:30 on Thursday. But what I listened to for an hour and 45 minutes changed my mind.”

He added: “The culture’s changed. Refugees are working a lot of jobs that white people won’t take anymore. The manager at Turkey Valley poultry plant told me he’d hire 100 more Karen refugees if he could.”

Larson blamed the earlier opposition on fear. “People were afraid refugees would come here in masses,” she said. “They were passing judgment based on anything they’d ever heard about immigrants, like in Beltrami County. Who knows better? A community where refugees live and work, or one where most people have never met a refugee?”

Commissioners would likely consent to allow refugee resettlement if the federal court injunction is succesfully appealed.

Crowley had been on the fence before the public forum. “Research changed that,” he said. “The January 7 meeting had a calm. The first meeting had a hate. 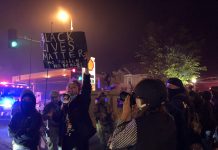 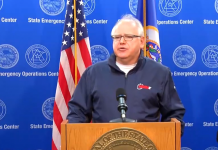 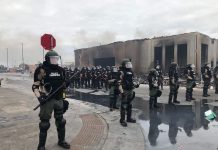 In rebuke of city leadership, Gov. Tim Walz says state has taken over